Three charged with murder of family members at Mibicuri 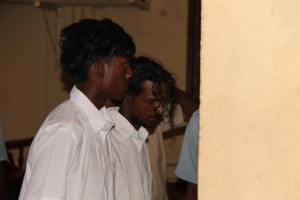 Jairam Tajeram and Tameshwar Jagmohan at the Georgetown Magistrates’ Court shortly after they were arraigned for the murder of three persons at Mibicuri, Black Bush Polder last month.

Their bullet-riddled bodies were found one day after they had gone on a fishing trip. 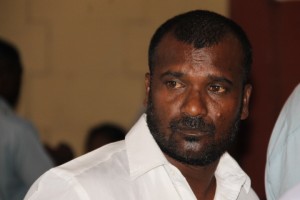 The unrepresented accused were not required to plea to the indictable charges that were read to them by City Magistrate, Judy Latchman. The accused were remanded to prison until September 6, 2016 when they will appear in Court of the Georgetown Magistrates’ Court for the case to be assigned to another court.

The trio arrived at the courthouse shackled and handcuffed and were escorted by police in the same manner until at about 2:23 PM when the handcuffs were unlocked by police and taken off to facilitate their arraignment.

They were all dressed in white shirts and dark coloured denim pants.

The accused were taken to court shortly after receiving advice from the Director of Public Prosecutions Chambers. Before the case was called, detectives were seen in the courtroom preparing documents.