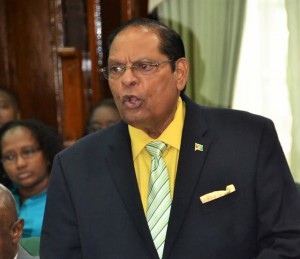 The United States’ 2015 Human Rights Report has cited Prime Minister Moses Nagamootoo’s directive to the state-owned Guyana Chronicle newspaper that all headlines must first get his office’s green-light.

‘In August the prime minister issued a directive that all headlines in the state-owned print media be first scrutinized and approved by his office before they are published. The directive was a response to a headline criticizing the government,” the report notes.

Back in August 2015, Nagamootoo had expressed concern to Guyana Chronicle reporter, Derwayne Wills about a Guyana Chronicle headline “Gov’t blunders on Budget Estimates … violates laws assented to by President Granger”. Back then, Nagamootoo had said “ “I was disappointed. I was very disappointed. I didn’t think that it was an objective headline in the sum total of what transpired yesterday in the Parliament” and “…is a government newspaper…it is a fully supported established company of the State…one would expect that it would merit the views of government not the ruling party.”

That section of the report, which comes under the section ‘Respect for Civil Liberties including Freedom of the Speech and the Press’ came days after the Prime Minister again publicly expressed concern about the Guyana Chronicle’s headlines.

Speaking with reporters following Demerara Distillers’ recent launch of its 50-year old rum, Nagamootoo again expressed concern about another headline in the Guyana Chronicle, this time about the rescinding of the appointment of businessman, Brian “BK” Tiwari as a ministerial advisor on business development. “When I read in the Guyana Chronicle – “BK booted”- I thought it was insensitive and misleading and that’s a State newspaper- the Guyana Chronicle- because it shifts the focus of an executive action to that of a person who is a recipient of an appointment and why do you think he should be put on trial for the action of an official,” said the Prime Minister who is responsible for information.

Later, Monday the Prime Minister’s office issued a statement strongly repudiating “irresponsible allegation” of state media censorship. “The Government of the Cooperative Republic of Guyana reiterates its commitment to the free media that provides for national coverage that is not driven by partisan politics. For the first time in many years, state media have been carrying articles and reports critical of the government while providing extensive positive coverage to the opposition. Allegations of censorship in state media have no basis in reality or fact.

Demerara Waves Online News has been reliably informed that at least two columns by Political Scientist, Dr. David Hinds and Trade Unionist, Lincoln Lewis have not been published by the Guyana Chronicle. Reporters at the Guyana Chronicle have been also upbraided for asking tough questions of top government officials.

But the Prime Minister’s Office says claims of media censorship are erroneous. “Such claims are wholly false and baseless and attempt to damage the image of the Coalition Government which is trying to repair democratic institutions, including state media which had been left in a shambolic state under the previous administration. The Coalition Government has established independent and professional boards for the major state media entities and has noticed that persons with strong political and social views outside of the state media staff have been enlisted as paid contributors.”