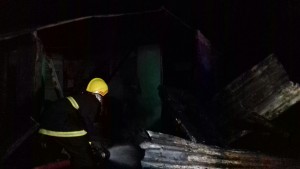 At least nine persons were Monday night searching for a place to rest after fire destroyed  two houses they were living in, according to eyewitnesses.

The blaze occurred at Lot 3Edun Street, Tucville, Georgetown at a house where the children of the late Donna Mc Kinnon lived.  Her lifeless body had been found on a vacant lot at Robb and Wellington Streets near the People’s Progressive Party Civic’s headquarters, Freedom House during the 1992 elections unrest.

Demerara Waves Online News was told that two of the three adjoining houses were destroyed and the other one was severely affected by water. There were no immediate reports of injuries, however it is understood that an elderly man was saved from one of the homes.

Fire fighters were credited by neighbours for preventing the blaze from spreading to neighbouring houses.

According to Omadeli Chester, an occupant of the front house, she first became aware of the fire after she heard shouts coming from her neighbor. 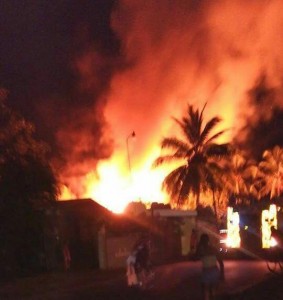 “I was in here and I overheard my daughter aunty them shouting for fire and when I came out and I saw the flames…The middle house was already on fire and we tried to form a bucket brigade but we couldn’t make it ,” she stated. 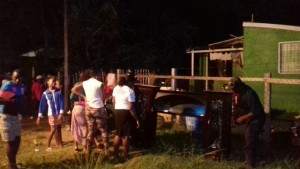 Several household effects that were saved from the fire.

After realizing that all was lost for the two houses, Chester said that the attention was then turned to salvaging whatever was left in her home.

“Then we start taking out stuff from out of my room,” she stated later adding that she was unsure of what may have caused the blaze.

Meanwhile, Noel Junor, who lived in one of the destroyed houses, was also at a lost to provide any explanation as to how the fire started.

“While I deh in the house I hear me sister in law from the front house, well she calling she sister and when I go out I see the fire,” said Junor.

He reported that the two homes that suffered the brunt of the flames housed nine persons, seven of whom were children.