Contractors will have to pay compensation for delayed, low quality schools- Manickchand 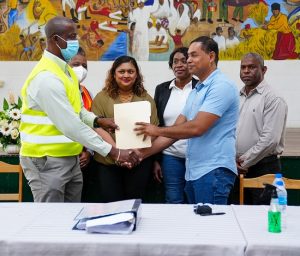 Minister of Education Priya Manickchand on Wednesday warned that contractors who fail to complete the rehabilitation and construction of schools and other education facilities would have to pay compensation to the government.

Indicating that she has to respond to critics, she said she would be harsher and more vigilant on delivery of projects. “That will see us doing things like liquidated damages because people suffer when we don’t get the schools ready, when they are not done on specs,” she said just before the signing of the GY$566.9 million contract for the reconstruction of the North Ruimveldt Multilateral School that was destroyed by fire on June 19, 2021.

The Education Minister indicated that when things go wrong the governing People’s Progressive Party (PPP) attracts the blame from the public while the contractors do not accept responsibility.

Ms Manickchand said the Ministry of Education does not play and role in picking the contractors but in the end if schools are incomplete and children would not get educated and live in poverty. She cautioned contractors against claiming that the government does not like them when they are penalised.

“It’s very important that we complete this at a high quality in the time that we said we would complete it so that we could make sure that the children of South Georgetown receive what we intended for them to receive,” she said. The reconstruction of the North Ruimveldt Multilateral School is scheduled to take 14 months.

In an effort to ensure that new schools are built to serve the needs of children because “it is not an engineering responsibility alone”, she announced that an education officer would be attached to the construction of those buildings. “Sometimes I find in my engineering department doesn’t understand the relationship between delivering education, expecting outcomes for results and changing lives and the building they are constructing,” Ms Manickchand said.

She said that ordinarily 150 students are placed at the school every year following the National Grade Six Assessment but due to the classrooms being destroyed the placement total  was reduced to approximately 50 students. “This is the top school for South Georgetown. So, it means many families in South Georgetown whose children ordinarily could have come here will have to travel further to access the quality of education that was being delivered here,” she was quoted as saying in a Ministry of Education statement.

Headteacher of the School, Ms. Allison Cosbert said that many persons had doubts about the project. However, she said that on many occasions she had to assure persons that the Education Minister promised the it will be rebuilt. “I can stand here today to see that promise is now a reality. So, today’s turning of the sod and contract signing is something that I welcome, and I can speak for my staff,” she said.

The building will measure 432ft (length) x 30ft (width) x 42ft (height). It will have three storeys and will accommodate 450 to 500 students. The school will be fitted with science laboratories, Information Technology Laboratories, new classrooms, teacher accommodation, a sanitary block and a modern external structure.