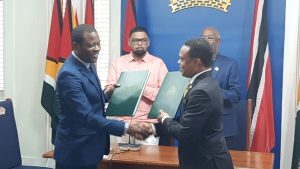 The Georgetown Chamber of Commerce and Industry (GCCI) on Sunday welcomed the signing of a memorandum of understanding between Guyana and Trinidad and Tobago to remove all trade barriers.

Before the just-concluded Caribbean Investment Forum on Agriculture, the city chamber had urged the Irfaan Ali-led administration not sign a memorandum of understanding unless several non-tariff barriers were first removed, but on Sunday that business organisation said it welcomed the “public commitment”  by the Trinidad and Tobago government scrap those humbugs.

“The Chamber notes that it is intended for a Commission, as well as a timeline to be established for the removal of these barriers. The GCCI views this as a step in the right direction,” the Chamber said.

The GCCI encouraged its private sector colleagues in Trinidad & Tobago to support its Government in the work to remove trade barriers. “Such support would engender a relationship based on mutual respect and usher in a spirit of cooperation between the territories for advancement of the regional agenda and private sector development,” the Georgetown Chamber added.

The Prime Minister of Trinidad and Tobago Dr Keith Rowley hinted that his administration was prepared to create an environment for unencumbered food production and trade with Guyana and the rest of the Caribbean even if it offends other players. “I could go on to tell you that we expect that there will be some push-back t0 what we are saying because those wh0 are comfortable with what is happening now will not be happy to hear that we intend to change it to something else but we are saying to them that ‘participate in the something else’ andf you have no losses, you have gains,” he told a joint news conference with President Irfaan Ali.

The GCCI said it was ready to work towards the clearing of obstacles to trade across the Caribbean Community (CARICOM). “The Chamber
also reaffirms its willingness to serve Guyana and the wider Caribbean, remaining disposed to offer support in the work to remove trade barriers in the region.”

Guyana’s Vice President Bharrat Jagdeo on Friday singled out the “politically connected” major retail stores with connections to regulatory agencies as the major perpetrators of non-tariff barriers to trade.

2022-05-22
Denis Chabrol
Previous: Guyana will attend Summit of the Americas to pursue its interests; will continue to lobby for Cuba
Next: Trinidad’s Petrotrin available to refine Guyana’s oil- Rowley