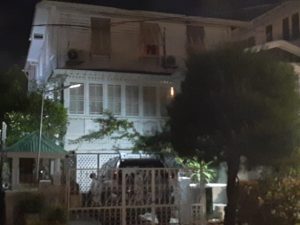 The residence of former Chancellor of the Judiciary Carl Singh on Middle and Cummings Streets where the incident allegedly occurred.

An Afro-Guyanese policewoman, who has accused an Indo-Guyanese lawyer of using racial slurs against her while she was on duty at his father’s residence, is seeking GY$150 million in damages for allegedly defaming her.

“By reason of the publication of the said  column, the claimant has been severely injured in reputation, credit, subject to ridicule and lowered in the estimation of right thinking persons of society, ” her lawyer, Eusi Anderson said in court papers filed on Monday.

Woman Police Constable, Shawnette Bollers has accused Attorney-at-Law Nirvan Singh of hurling racial slurs at her while ordering her off his father’s premises at Cummings and Middle Streets where she had been posted to provide security.

She claimed that the incident was reported to police. The Guyana Police Force has refused to confirm whether it has received a complaint, despite repeated requests.

In the court papers, Ms Bollers is claiming the GY$150 million for slander allegedly published orally by Mr. Singh  on March 20, 2022. She alleges that Mr. Singh approached her and chased her out of the property, forcing her to abandon her post and duties for the said night. She said he he used certain words in a “loud and aggressive manner which amount to defamation of character. “The willful malice in the slander in the slander is observed in the fact that he used these words to her whilst she was in uniform including full police regulation number and other police markings.” Through her lawyer, she alleged that Ms. Singh’s behaviour amounted to “an absolute disregard for the authority of her uniform.”

Stating that the words allegedly published were untrue, malicious and uttered and undiluted falsehood, she said they expressly or by innuendo meant that she was not a human being of the homo sapien species and by extension not worthy of recognition in her humanity or human dignity.”

She is also claiming exemplary damages. “Exemplary and aggravated damages are warranted, further, because of the nature of the comments in the context of slavery and its effect on Black people and the universally accepted norm that Black and monkey are derogatory terms forbidden from use on anything other than monkey and apes,” according to court papers.

The lawyer said that Ms. Bollers has been receiving counselling and therapy to assist in her resuming normal eating and sleeping.

The incident occurred at the residence of former Chancellor the Judiciary, Carl Singh.