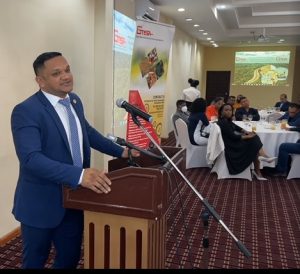 Minister of Natural Resources, Vickram Bharrat  on Tuesday said government has softened its enforcement of backfilling and reforestation of areas that have been already mined because of generally low recovery rates of the precious yellow metal.

He said the current rate of recovery is about 30- to 35 percent which means that there is another 65 percent of gold that has not been collected during the ‘wash down’ phase. In that regard, he said small-scale miners usually extract gold from the tailings, the major reason for not pushing for at least two environmental procedures to be taken. “That is why when some people ask why is it we don’t enforce the reclamation and reafforestation clause in the mining agreement; we can’t because many a time you find the small miners they go and work the tailings pond over and over because there is still gold there because if you recover 35 percent, it means that you still have 65 percent lying in the pond there. That is where our pork-knockers and our small miners get their gold from,” he told a Guyana Manufacturing and Services Association luncheon held at the Princess Hotel.

The Natural Minister acknowledged that that has been a “big challenge” for the mining sector, even as he cited the need for advanced technologies to recover larger amounts of gold. “Maybe, we have to start doing things differently, maybe we have to start using new technology, new methods but we would have to look at these things in order to move forward as a sector,” he said.

Meanwhile, in the area of forestry, the Natural Resources Minister said that generally 80 percent of felled trees is wasted, although a number of sawmillers have boasted that they have been able to  recover 65 to 70 percent.

Citing those challenges in the gold and forestry sector, he stressed the importance of manufacturing value added products. In that regard, he said the Guyana Mining School has decided to train at least 100 goldsmiths. “We have not truly realised our potential through value added,” he said. He also  said Guyana needed more joiners to manufacture wood products which could more than double the value of logs.

The Natural Resources Minister noted that mining and logging account for 50,000 direct jobs and more than 100,000 indirect jobs.

He said Guyana’s forest, which covers more than 80 percent of the country, could trap 19.5 gigatons of carbon.