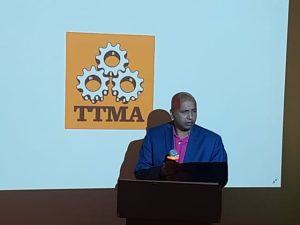 The Trinidad and Tobago Manufacturers Association (TTMA) on Tuesday assailed the 15-nation Caribbean Community (CARICOM) for failing to remove non-tariff barriers on goods, especially food being produced in the region.

TTMA’s Chief Executive Officer, Mahindra Ramdeen vented his frustration at the trade bloc’s failure to create a truly single space for regional goods because of “the political will or whatever reason.” “We need the political directorate to get these things right for us and all the talking at that level to say whatever is happening to hamper trade; just get it right, Create the environment for us and Guyanese businessmen will prosper, Trinidad businessmen will prosper in the non-energy sector and once we are starting to talk about food, it wouldn’t start and end there,” he said. The TTMA boss said the spin-off would include printing and packaging for the food processing, agro-processing, cleaning products, and uniforms.

Mr. Ramdeen indicated that CARICOM was stifling the production of certain products that have been already certified by authorities in North America and Europe. “We do it already. Most of my manufacturers in Trinidad and Tobago….we produce and export to the international arena. We supply our products to the United States  and Europe and if we are meeting those standards, we can meet any standards throughout the Caribbean but we need the rules for the Caribbean to be fixed,” he said at  the opening ceremony of his organisation’s trade mission, which has attracted a 23-member delegation.

With Trinidad and Tobago’s food import bill estimated at TT$6 billion the TTMA chief said businesses needed to “push the envelope” and the political directorates needed to create the enabling environment for Trinidad and Tobago and other Caribbean manufacturers to produce world class products and take advantage of large-scale farming opportunities in Guyana, Suriname and Belize. “Guyana is professing that they could feed the entire region. Belize, Suriname- they have the land mass to do it. We need these inputs to facilitate our agro-processing sector,” he said. He noted that while Trinidad and Tobago was buying a lot of its food from outside the Caribbean, regional  trade was facing the perennial humbug of sanitary and phytosanitary measures. “These are the things they need to discuss and let’s resolve those issues so the trade could flow,” he said.

The TTMA Chief Executive Officer said while businesses from both sides have participated in exchange trade missions over the past 12 years since he has been at the helm, there are great opportunities for Guyanese raw materials  to build Trinidad’s manufacturing sector.

Mr. Ramdeen said he has been lobbying for “fixing” the CARICOM Single Market and Economy rather than bilateral arrangements among member states. “Let’s fix the rules, the terms of engagement, the trading relationship so anybody wants to trade the way it’s supposed to…,” he said.

The TTMA, he said, has begun to make representation to the Caribbean Private Sector Organisation, which is part of CARICOM’s decision-making system, to address those concerns.