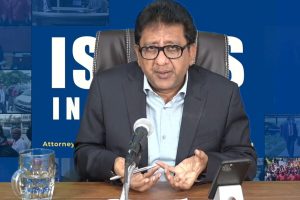 Attorney General Anil Nandlall on Tuesday said President Irfaan Ali did not breach Guyana’s Constitution by selecting Assistant Police Commissioner Clifton Hicken to act as Police Commissioner, and added that he was not obliged to pick the most senior police officer.

In clear reference to concerns raised by the People’s National Congress Reform (PNCR) that Deputy Police Commissioner Paul Williams was bypassed to act as the top cop, Mr. Nandlall  stopped short of saying that the President determined that Mr. Hicken was the better of the two. “There is no rule, there is no provision i any law that requires the most senior officer to be chosen. Seniority and meritocracy are not the same thing. Seniority and excellence in performance are not the same thing,” he said.

The Attorney General dared the PNCR to challenge the constitutionality of Mr. Hicken’s appointment in court because he was confident that the court would agree that that law enforcement agency needed someone at the helm to manage and superintend it. “The law will justify a President making an appointment even though those with whom he has to consult are not available for consultation. There is a doctrine in law called ‘necessity’…so it is against that backdrop the President is completely justified to put someone to perform the functions of Commissioner of Police,” he said.

There is no  Police Service Commission (PSC) for the President to consult with its Chairman about a new Police Commissioner because  the PNCR is yet to take all steps for the eventual emergence of its leader, Aubrey Norton, as Opposition Leader. But, even after such consultations with the PSC and the Opposition Leader, the President still enjoys the right to appoint his choice. “The Police Force cannot be headless,” Mr. Nandlall said. At the same time, he said “not even a judge” could substitute the decision of the President to appoint a Police Commissioner in his own deliberate judgement even if there was a PSC and Opposition Leader. “There may be political consequences based on the choice that he makes but there are no legal consequences. The President has a power to choose and he has exercised that power,” he said.

The Attorney General threw his weight solidly behind Mr. Hicken, saying that over the years he has acted in “very senior positions” and headed several decisions and “from all indications and from all the evidence available, he has acquitted himself with distinction and with a high degree of professionalism.”

Meanwhile, Mr. Nandlall said the PNCR appeared to be bluffing that it would take legal action as had been its position on the passage of the Natural Resource Fund legislation more than three months ago.