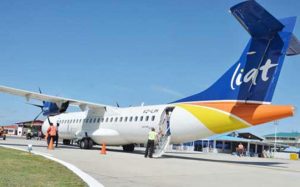 LIAT (1974) Limited would have to show that it would be feasible to serve the Guyana route before fresh approval is granted to fly to this southern Caribbean Community (CARICOM) mainland nation, but would not be blocked to protect InterCaribbean Airways, Aviation Minister Juan Edghill said Friday.

“No, no, no, no! There is no exclusivity here for anybody…We like competition so I said whether it’s InterCaribbean or another airline, there is no negotiated exclusivity or we’re not holding the turf for anyone. We are seeking to provide adequate service to the people of Guyana,” he said when asked by Demerara Waves Online News/ News-Talk Radio Guyana 103.1 FM.

InterCaribbean begins 12 weekly round trips between Guyana and Barbados from December 17.

Deputy Director-General of the Guyana Civil Aviation Authority (GCAA), Saeed Suliman also said that the Antigua-based carrier would have to discuss how it would first settle its debts. He and Mr. Edghill said LIAT had written in June, 2021 requesting permission to resume flights to Guyana.  Noting that that carrier was under administration, it would have to present a business plan and “they haven’t done that.”

LIAT owes the GCAA US$996,466.32- that’s almost GYD$21 million- for landing and navigational charges, and the Ogle Airport Inc  just under GYD$60.5 million dating back to December, 2019. Mr. Suliman said LIAT has never asked for a debt write-off.

The Deputy GCAA Director-General said because LIAT is under administration, that creates a “little challenge” with their application process. “If LIAT comes today and shows that they have the financial ability to perform the service and they meet all the safety requirements; I’m sure they can easily, they will get the clearance but at this point in time they are under administration so they have to go through that application process with us,” he said.

Asked why LIAT (1974) Ltd. needed new permission to fly to and from Guyana, he said the fact that the carrier had ceased operations did not mean that it could automatically do so based on previous authorisation. “There are rules of engagement. You don’t just fly, stop flying and then you wake up and say you start flying again… You just don’t take t to the skies when you are ready,” he said.

Already gripped by a decades-long financial crisis, LIAT ceased operations across the region last year after shareholder governments Barbados, and St Vincent and the Grenadines refused to provide more financing and eventually pulled out.

The Antigua and Barbuda government and the administrator have been slowly resuming flights to a number of countries and territories.  Since its restart in November 2020. St. Thomas, United States Virgin Islands has become  its 10th destination