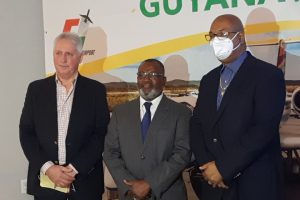 Guyana’s emerging oil and gas sector is expected to be a booster for  operations of the Turks and Caicos Islands-based InterCaribbean Airways which is set to  provide 12 weekly round-trip flights from Guyana to Barbados early next month, Aviation Minister Juan Edghill said Friday.

“ExxonMobil was chartering flights to come to Guyana to bring their staff on rotation. They have signaled that they are bringing that to an end,”  he said. The Minister noted that there are an estimated 2,500 passengers who travel to and from Guyana for staff rotation, with Barbados being a destination where long-haul flights terminate needs a carrier that “gets them in and gets them out.” “InterCaribbean will certainly fill that void,” he added.

Guyana, he said, was in discussions with airlines from Europe and Asia to fly the Guyana route.

He told a reception to mark the official entry of InterCaribbean in the Guyanese market that the carrier would be offering connecting flights to Guyana from extra-regional carriers that terminate in Barbados. Mr. Edghill highlighted that InterCaribbean was coming to Guyana at a time when there was insufficient connectivity to serve officials of the Guyana-based Caribbean Community (CARICOM) headquarters who have to travel to and from meetings.

Minister in the Ministry of Public Works, Deodat Indar hoped that one of the 50-seater planes could be based in Guyana so that at least 20 jobs could be created. InterCaribbean already employs about 40 Guyanese in various fields.

Roraima Airways is the agent for InterCaribbean Airways. 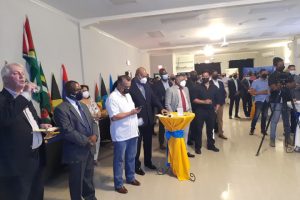 A section of the gathering at the launch of InterCaribbean Airlines’ service to Guyana.

Captain Gerry Gouveia Jr; a Director of Roraima Airways, hoped that with a new airline in the Guyana market, aviation industry workers would get greater exposure on other aircraft. “It’s giving young Guyanese pilots, engineers and everyone working in the aviation industry a goal in the end. It’s a pipeline that we can get young pilots all the way to the jets which is unprecedented here in Guyana, except when we had GAC (Guyana Airways Corporation) back in the day,” he said.

He expected that InterCaribbean would bring an end to decades of hassle travel and herald in easy and affordable movement of people throughout the region.

Roraima Airways’ pilot, Learie Barclay said Guyana, now a regional “powerhouse”, was now properly positioned to fight to remove non-tariff barriers such as phytosanitary measures to now allow for Guyana’s produce to get into Caribbean countries. “The cargo holds of these aircraft are slated to get Guyanese products, Guyanese fresh fruits on the tables of a hotel in Barbados the next morning, to resorts,” he said.

President of the Georgetown Chamber of Commerce and Industry (GCCI), Timothy Tucker said the new carrier would “boost trade and tourism with our Caribbean counterparts.” Guyana and Barbados have agreed to examine several business and education opportunities including the sale of building materials, agricultural produce and gold jewellery to Barbados, and Barbados’ training of 6,000 Guyanese in the provision of hospitality services.

Chairman of InterCaribbean Airways, Lyndon Gardiner remarked that he had seen a “new growth opportunity” that led to his airline opening a base in a Barbados to serve six Eastern Caribbean island and now Guyana, the 27th destination. He praised the approach by the People’s Progressive Party Civic administration in facilitating its operations to Guyana, after starting several years ago. “Only recently with the ‘open-for-business’ efforts of this government we were able to put everything in place and we are here to make the announcement to make the service a reality,” he said.

In clear reference to the oil and gas economy, Mr. Gardiner hinted that Guyana’s economic buoyancy is a major reason for serving the route. “Everyone wants to move here to be part of the new oil, gas, tourism and manufacturing sector. I’m proud. InterCaribbean is proud to be a part of this new growth and to support it and I feel that Guyanese leadership is bullish on managing its economy and encouraging direct foreign investment in a way that is beneficial to the long-term strategic interests of Guyana,” he said.

He praised Barbados for allowing his airline to choose that island as its hub by removing restrictions and approve direct routes to allow for greater efficiency.

InterCaribbean Airways began spreading its wings across the region after LIAT (1974) stopped flying because COVID-19 had hit that already cash-strapped regional carrier. LIAT (1974) Ltd; with support from the Antigua and Barbuda government, has since resumed operations to a number of destinations.