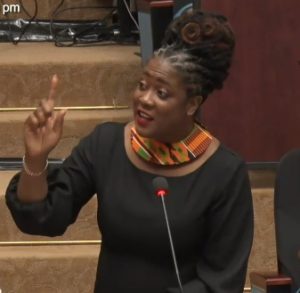 Home Affairs Minister Robeson Benn, in kicking off debate, said one of the key amendments to the Births and Deaths Registration Act  was making it easier for unregistered adults, without original documents, to obtain birth certificates with statutory declarations by prominent community leaders and Toshaos who are also Justices of the Peace or any other notarised document containing particulars of the birth

But the opposition A Partnership for National Unity+Alliance For Change (APNU) raised suspicions about a number of the amendments, suggesting that it was part of a plot by the governing People’s Progressive Party Civic (PPPC) to rig future general elections by padding the voters’ list with the names of foreigners. “There will be thousands of new birth registrations particularly effected in those far-flung hinterland regions using an established network of PPPC-aligned Justices of the Peace, Notaries Public and Toshaos,” opposition legislator, Attorney-at-Law Amanza Walton-Desir told the House. She predicted that eventually the PPPC administration would push for house-to-house registration after the births of thousands of persons have been registered so that their names would be included on the voters’ list. “This clause, Mr. Speaker, allows the ultimate opportunity for mischief that is perhaps the cornerstone that is being laid to ultimately and possibly irreversibly subvert the will of the people of Guyana,” she said.

Ms. Walton-Desir noted that Trinidad and Tobago requires a range of documents to back up an unregistered adult’s request for a birth certificate. They include immunisation cards;  statements by a relative who had been present at the time of birth, parents, midwife or birth certificates of siblings born before or after the applicant.

She was especially fearful that Venezuelan refugees, thousands of whom who have already sought refuge here, could obtain Guyanese citizenship through the now amended legislation. “I am speaking of those, Mr. Speaker, who could, for all intents and purposes, with a complicit Toshao, with a complicit Justice of the Peace, with a complicit Commissioner of Oaths to Affidavits acquire a Guyanese birth paper when they are not entitled to one, Mr. Speaker,” she said.

Minister of Governance Gail Teixeira, though, dismissed Walton-Desir’s theory and instead alleged that APNU+AFC was the party that had been involved in electoral malpractice in 2019 and 2020.  “When we talk about mischief afoot, I think that the opposition members, who have spoken so far, are talking from a guilty conscience, that they are thinking that the PPPC will do what they have done, and what they did and what they tried to do in 2019 and 2020,” she said.

Ms. Teixeira said the amendment to the Births and Deaths Registration Act makes it easier for persons, whose births have not been registered, to do so. “It modernises the system and it makes it easier,” she said.

The Governance Minister also justified government’s decision to amend the law to allow mothers to register their children with surnames of their choice. She said the legislation would now empower women to make such a decision on their own.

On the issue of who is the father, she said the court could settle such matters. “What I think Mr. (Khemraj) Ramjattan is afraid of is that men in this country would think that a woman may give the name of the person she thinks is the child-father the name. Well, they can go to court and battle it out because who knows the father better than the mother,” she said. She explained that there are persons , mainly Indo-Guyanese, who have one names and so that legislative change would allow for a surname to be added.

APNU+AFC frontbencher, Attorney-at-Law Khemraj Ramjattan was worried that giving either parent the right to give a child a surname would lead to confusion. “That is rather sweeping a section…. Here the identity is also something that will make the child name who it is…This is giving a disconnect to that which can bring the history of the person who is now born so to associate that person with the parentage,” he added.

He suggested that the law be further amended to allow for both parents to consent to choose surnames of their choice.

Attorney General Anil Nandlall said that, among other things, one of the amendments now require the Registrar General to appear in court to state whether requests for changes to birth registration particulars should be approved.

Government lawmakers noted that thousands of Guyanese, even elderly people, who never had a birth certificate.