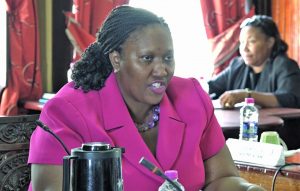 Town Clerk of the City of Georgetown, Sherry Jerrick has told the Local Government Commission that she does not have the power to discipline pump attendants who are being blamed for recent floods in the capital.

“Please be advised that as the Town Clerk (ag) for the City of Georgetown I am not vested with the power and authority to unilaterally discipline employees of the Council. Discipline, as you are aware, is a responsibility and function of the Local Government Commission,” she told the Secretary to the Local Government Commission, Nickalai Pryce in a letter dated June 18, 2021.

Ms. Jerrick reminded him that the Commission on June 1 informed that only that body has the power to regulate and staff local government organs including the discipline and dismissal of staff.

The Town Clerk indicates that this means that the Mayor and Councilors also do not have the power to discipline staff. The Town Clerk told the Local Government Commission Secretary that based on media reports and concerns by the President and the Minister of Agriculture, the City Engineer, Colvern Venture has been asked to submit a report.

Ms. Jerrick says to date Mr. Venture has not submitted the written report, but a “verbal synopsis” has been presented and subsequently reported at a news conference.

She says when that is done, it will be dispatched to the relevant City Council Committee after which the Council will send a report to the Local Government Commission to decide whether disciplinary action should be taken.

At the same time, the Town Clerk suggested that the Local Government Commission can go ahead  and probe the allegations that have been levelled against the pump attendants and take action based on evidence. “It is my view that the aforementioned does not preclude the Local Government Commission from invoking its statutory authority to discipline the Pump Attendants, provided that it has conducted an independent investigation and has within its possession sufficient evidentiary material to support its claim that the Pump Attendants are underperforming, that they have failed to execute their duties and they have flooded the city, as stated in your correspondence,’ she said in the two-page letter to Mr. Pryce who on June 17 had given her 24 hours to state what action has been taken to discipline the pump attendants.

The Minister of Agriculture, Zulfikar Mustapha this week announced that central government, through the National Drainage and Irrigation Authority (NDIA), would be taking over responsibility for sluices and pumps in Georgetown because the municipality has been doing a poor job.

But the Town Clerk told the Local Government Commission that the Council does not have any objection to the central government agencies assisting. “The Council has indicated its desire to continue to collaborate with the National Drainage and Irrigation Authority of the Ministry of Agriculture (as was successfully done in the recent past) to operate pumps, and maintain sluice gates, kokers, primary and secondary drains in order to improve the efficacy of the drainage network within the city,” she said.

Responding to the Local Government’s question about what plans would be put in place to prevent current and future floods, Ms. Jerrick  said the Council has established an emergency fund to address urgent matters pertaining to the operations of kokers/sluices; and and “has reviewed and reinforced the system for nightly visitation by its Engineers to monitor and manage the waterfront operations, including the workforce of essential workers at kokers/sluices.”