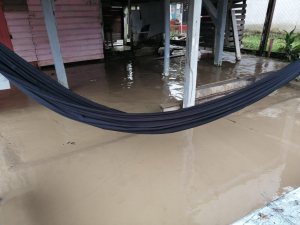 Inside a flooded house at Little Diamond, East Bank Demerara.

Several families of Little Diamond, East Bank Demerara  was Friday morning scrubbing their yards and lower flats from thick sediment left behind from flood waters due to a breached river defence.

The Civil Defence Commission (CDC) said flood relief hampers were distributed Friday morning to affected households who have been affected in Thursday’s flooding of the area due to a breach of the river defence.

According to the CDC, the breach was Friday being repaired and the flood water was receding. ” The CDC notes that remedial work on the breached area is currently underway as the flood water is receding,” the government emergency response and relief agency said. 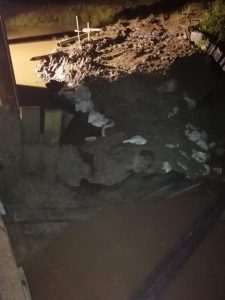 The breach in the Demerara River defence that caused flooding at Little Diamond, East Bank Demerara.

Figures show that 80 families were affected by the flood, causing the CDC to provide cleaning supplies.

Thirty-six families in one section have received cleaning supplies with a remaining 44 to collect before the exercise concludes Friday, the agency said.