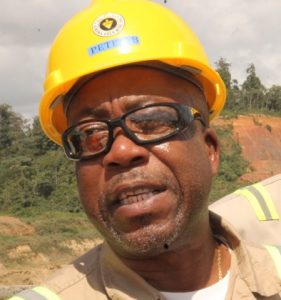 A forklift toppled at the Aurora Gold Mines’ site, hurting a warehouse worker who has since been evacuated to the city for medical treatment, a senior company official said.

Peter Benny, Human Resources Manager of the Zijin Mining Group-controlled in the Upper Cuyuni, said the worker sustained injuries his right leg when the forklift toppled at the back of the kitchen area of the dining hall. “He was assisting in offloading some materials which had arrived in Camp on a truck,” he told News-Talk Radio Guyana 103.1 FM/ Demerara Waves Online News.

Mr. Benny said depending on the medical examination, the incident could very well result in the first loss-time occurrence in approximately 270 days. “We have hardly had any lost time accident since they (Zijin) took over. The record has been good but these things do happen,” he said.

The worker was evacuated to the coast by Roraima Airways and was taken to a private city hospital for all-expenses paid treatment in keeping with company policy, Mr. Benny said.

The Human Resources Manager said the company would be investigating the occurrence and would also be reporting it to the Occupational Safety and Health Department of the Ministry of Labour, and the Guyana Geology and Mines Commission.