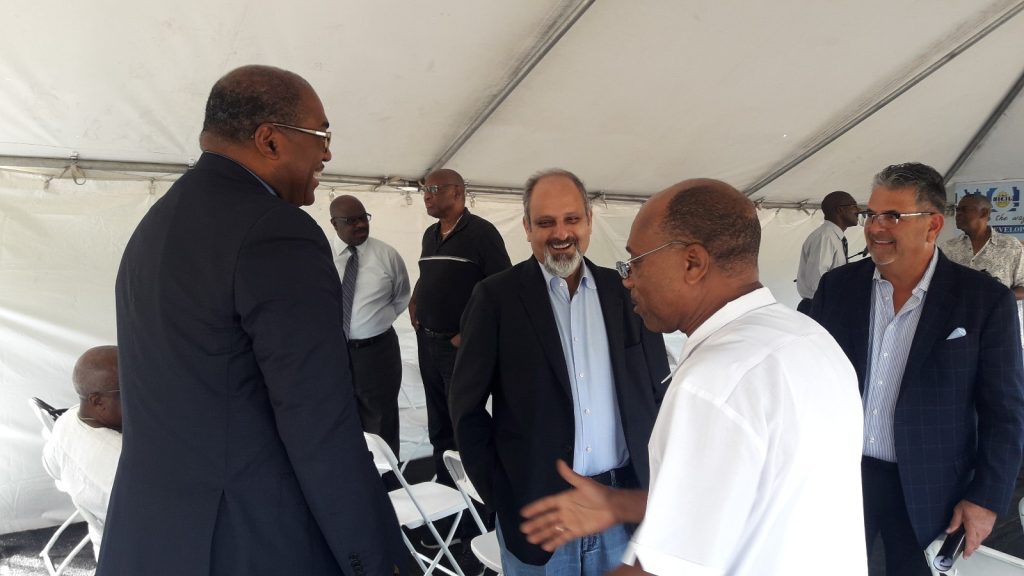 Attorney-at-Law Nigel Hughes, CEO of Triniyuana John Aboud and Deputy Head of the State Assets Recovery Agency (SARA), Aubrey Heath-Retmyer at sod-turning and announcement of the sale of 2.61 acres of “prime” land at Ogle, East Coast Demerara for more than GYD$52 million to build an AC  Marriott-branded hotel.

Almost one month after Colvin Heath-London was fired from the post of Head of the Special Purpose Unit of government’s holding company for State assets, he on Sunday remained in police custody for almost 72 hours concerning the lease of lands but his Attorney, Nigel Hughes, said records show that decision was taken before the no-confidence motion in December, 2018.

In the NICIL Board Note to file, the Minister of State was expected to secure all necessary approvals through Central Housing and Planning Authority following receipt of all pertinent files from NICIL CEO.

Mr. Hughes said his client was arrested for alleged conspiracy to defraud. Since Mr. Heath-London’s arrest, he has been reportedly questioned about “whether he was aware of any Board or cabinet approval for the leases which did require written permission of NICIL before they could sublet the properties.”  He added that the former government official was asked whether he was aware that a clause which requires lessees from NICIL to secure permission in writing from NICIL before subletting  the leased property was included in contracts of  four companies.

The lawyer, however, stated that at the time of the execution of the leases subject of the interrogation, Mr. London was not the Chief Executive Officer of NICIL as that office had been held by the now deceased Mr. Horace James. Mr. London was head of  NICIL’s Special Purpose Unit  (SPU) to oversee the acquisition and disposal of assets of the loss-making State-owned Guyana Sugar Corporation.

Then Head of NICIL’s Special Purpose Committee for the sale of Guysuco’s assets, Colvin London

The incumbent People’s Progressive Party Civic (PPPC) is on record as saying that all major deals and agreements after the no-confidence motion against the then A Partnership for National Unity+Alliance For Change (APNU+AFC) had been passed were illegal. Mr. Hughes says the minutes and records of meetings of the Board of the National Industrial and Commercial Investments Limited (NICIL) were dated January 15, 2018.

Mr. Hughes said to date, the only allegation which has been put to Mr. London is that the clause which required the written permission of the lessee to sub let was not included in some contracts. The lawyer said police investigators were informed that the omissions of the clause did not require NICIL’s written permission, is not a criminal offence and it had been sanctioned by the Board in keeping with its decision.

The lawyer said the investigating p0lice officer said he had not been provided with any instrument that purportedly prohibits, restricts or circumscribes the inclusion of a clause which permits the subletting of properties which had been leased by NICIL.

The former Head of NICIL’s SPU said the current NICIL Board had lodged the complaint to the police.

Mr. Heath-London reported to the headquarters of the police force’s Criminal Investigations Department on Friday, November 20 at 8:30 AM and was still in custody on Sunday, despite requests for him to be released from custody, according to his Attorney-at-Law.

Declaring that Mr. Heath-London, who was acting Chief Executive Officer of NICIL, after then CEO Horace James died on January 30, 2019 was wrongfully arrested and detained, the Attorney-at-Law also said  a change of clothing and a toothbrush also disappeared from the Brickdam Police Station where he was locked up. “On Saturday the 21st November 2020 the clothing and personal items which had been lodged by Mr. Hamilton in the presence of his counsel the night before had mysteriously disappeared and could not be located. Mr London was denied the opportunity to take a shower or perform the basic personal hygiene measures before been taken away to CIF HQ for further questioning,” he added.

He added that the former NICIL/SPU official  has not been given any reason for his detention for carrying out the policy of the Board of Directors for decisions taken prior to the No confidence motion.

In the video recorded interview, Mr. Heath-London was also asked whether he knew Mr. James, Attorney-at-Law James Bond, Sworn Land Surveyor Timothy Fisher, various executives of companies which had leased land from NICIL. Mr. Hughes noted that “some of these  leases had the clause which required the written permission from NICIL before subletting and some did not.”

Attorney-at-Law Hughes said Mr. James had informed  the newly appointed Executive  Head of the NICIL/SPU of plans that were on stream for the Peter’s Hall area to be designated as an industrial park in support of Guyana’s new oil and gas sector. Based on the lawyer’s account, Mr. James had said that nationals’ inability to secure capital to facilitate business alliances such as joint venture arrangements may be stymied. Mr. James then reportedly proposed that that lease transactions  should be amended  to facilitate  sub letting  thus creating a more competitive platform for local companies and nationals to benefit from this new business opportunity.

The then NICIL CEO then went ahead to make arrangements for the commissioning of valuation and survey reports, preparation of leases to qualified applicants to facilitate onward subletting  by all approved leases, according to the lawyer. He added that industrial park lease transactions were to be formulated immediately for the Peter’s Hall area  as well as other areas to be earmarked in Berbice and Demerara.
The above NICIL Board Note was dated the 2nd January 2018 approved and stamped by Mr. James  12th January 2018 and received by NICIL/SPU on 15th January 2018 .

2020-11-22
Denis Chabrol
Previous: OPINION: New faces on the political horizon -a primer
Next: Flight agent robbed in front of her Plaisance home