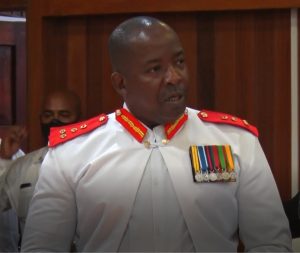 The Chief-of-Staff of the Guyana Defence Force , Brigadier Godfrey Bess has vowed that no foreign forces will again be allowed to invade this country’s seaspace and target the country’s oil exploration and production operations.

“Not so long ago, Sir, exploration of our hydrocarbon reserves were threatened when foreign forces forcibly removed exploration vessels from our sovereign waters. This must never happen again. These production assets must be secured and Guyana’s Exclusive Economic Zone must be protected at all cost,” he said.

The United States Department of Defence recently gave clearance for Guyana to  purchase of four Bell helicopters to assist with aerial surveillance, search and rescue, drug interdiction and transport to and from offshore oil rigs.

The latest incident to have occurred had been in December, 2018 when the Venezuelan Navy had sparred with a Norwegian seismic vessel that had been surveying part of the Stabroek Block for ExxonMobil.

In June 2000, Surinamese gunboats had chased out an drilling rig, owned by Canada’s CGX Energy Inc, from a Guyanese oil concession near the border with Suriname.

That offshore boundary dispute was subsequently settled by the United Nations Law of the Sea, showing that the rig had been well within Guyana’s maritime space.

In October 2013, the Venezuelan Navy had arrested a Malaysian-registered seismic vessel that had been conducting seismic research in a Guyanese offshore oil concession that has been granted to the American oil firm, Anadarko Petroleum.