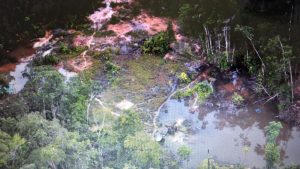 An aerial view of the camp at New River Basin.

Guyanese authorities have dismantled a tunnel mining operation in the New River Basin where such activity is prohibited because it is rare earth reserve, the Guyana Defence Force (GDF) said in a statement.

No one was arrested, but the army believes that the operation was being supported from an illegal airstrip in about two miles south of the Guyana-Brazil border.  The GDF did not specify what was being mined.

“The team located the camp and discovered three tunnels, one of which was abandoned, while the remainder were deemed active. The team also discovered several pieces of equipment including a satellite dish. No one was found at the camp,” the GDF said in reference to a joint operation that was conducted earlier this week along with police and the Guyana Geology and Mines Commission (GGMC).

A GDF spokesperson said the camp was located about 120 miles from the GDF base through dense terrain. 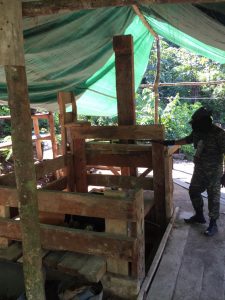 An entrance to one of the underground mining tunnels at New River Basin.

According to the army, due to the remoteness of the location, seizure of the equipment was not feasible, so they were subsequently destroyed.

The New River Basin is designated a Rare Earth Mineral Reserve and as such, mining is strictly prohibited in the area, the GDF said.