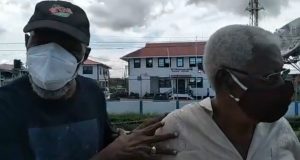 Vincent Alexander and Desmond Trotman outside the Beterverwagting Police Station where Deputy Chief Elections Officer Roxanne Myers was being detained.

Pro A Partnership for National Unity+Alliance For Change (APNU+AFC) Elections Commissioner, Vincent Alexander said he and his two colleague opposition commissioners have not been contacted by police as part of an investigation into alleged electoral fraud, a clear indication of a politically motivated probe.

Speaking outside the Beterverwagting Police Station where Deputy Chief Elections Officer Roxanne Myers was confined to a cell after she was arrested by police for alleged “conspiracy to defraud”, Mr. Alexander challenged the police force to take her before the court. “If you charges against the woman, charge her and take carry her to court,” he said.

The GECOM Commissioner assailed police for receiving statements, including a voluntary one from pro-governing People’s Progressive Party (PPP) Elections Commissioner, Bibi Shadick while failing to contact himself and other APNU+AFC commissioners Charles Corbin and Charles Corbin. Mr. Alexander said that was evidence of a politically inspired investigation.

He said over the past two months the prosecution has failed to lay documents in court to back up its charged, but instead continued to charge persons. Chief Elections Officer Keith Lowenfield, Region Four Returning Officer Clairmont Mingo, Information Technology Officer at the Guyana Elections Commission, Enrique Livan and Registration Officer, Sheffern February have all been charged with offences related to alleged electoral fraud. Chairman of the People’s National Congress Reform, Volda Lawrence has also been charged.

Attorney-at-Law, Nigel Hughes said Ms. Myers has since been moved from the Beterverwagting Police Station back to the Guyana Police Force’s Criminal Investigations Department (CID) headquarters, Eve Leary. He said she is wearing a face mask to protect herself against contracting the COVID-19 virus.

University of Guyana Professor, Melissa Ifill earlier Wednesday said she visited Ms. Myers at the Beterverwagting Police Station where the police were polite but not wearing masks. She noted that one of them was “sniffling.” Ms. Myers reportedly suffers from two non-communicable diseases that make her more susceptible to complications should she contract the novel coronavirus that has so far killed 98 persons in Guyana.

A national vote recount shows that the PPP secured just over 15,000 votes more than APNU/AFC, but the Chief Elections Officer in a report said there had been numerous instances of voter impersonation, missing documents that made it impossible to reconcile the votes cast with registered voters  as well as anomalies.

However, various decisions by the High Court, Guyana Court of Appeal and the Caribbean Court of Justice indicated that the figures from the national vote recount must be used to declare the results of the March 2 polls. After a string of court battles, the PPP was declared the winner on August 2, 2020.

Weeks later, private criminals charges had been filed against Mr. Lowenfield and Mr. Mingo but those had been subsequently taken over by the Director of Public Prosecutions who asked that a thorough probe be conducted.