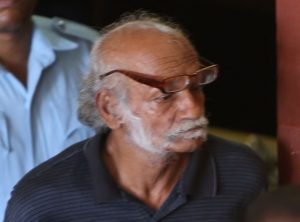 The trial of city businessman, 75-year-old Mr Ganga Krishna and his employee, who are accused of the November 2014 alleged murders of Mr Randolph Thomas and his two teenage daughters, restarted on Monday, October 05, 2020 before Justice Brassington Reynolds and a 12 person jury.

Mr Krishna, along with his 27-year-old employee Mr Avishkar Kissoon were first brought before a judge and jury in August 2019.

However, their trial was aborted on two occasions due to certain irregularities that were brought to the judge’s attention. The judge took the decision to abort the trials in the interest of justice. The two murder accused are being represented by Attorneys-at-Law Ms Latchmie Rahamat and Mr Dexter Todd. State Counsel Ms Shawnette Austin is presenting the case for the prosecution.

Their trial was restarted but due to the COVID-19 pandemic which was first discovered in Guyana in March, the Judiciary suspended all jury trials. Under strict COVID-19 measures, jury trials in the county of Demerara restarted today which marks the opening of the October session of the Demerara Criminal Assizes.

The Robb Street fatal fire claimed the lives of the two girls, 15-year-old Ms Theresa Rozario, and her 12-year-old sister Ms Feresa Rozario. Both of them were burnt to death after the early morning fire gutted the Robb Street, Georgetown building which they occupied with their father, Mr Randolph Thomas, 63, who escaped the blaze.

According to reports, a drug addict reportedly confessed to setting the fire claiming he was offered money to raze the disputed building. It is believed Thomas was appealing for prescriptive rights after occupying the building for some years. During testimony in the trial, the girls’ mother Ms Clarissa Rosario was inconsolable.