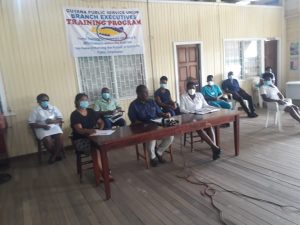 In the face of threats to take disciplinary action agains nurses who have been staging industrial unrest since last week, the Guyana Public Service Union (GPSU) on Thurday warned that it would call a full-scale strike by healthcare workers.

“We will mobilise for full strike action if we do not get a positive response for discussion,” he said.

The 72 hours will expire next week Tuesday.

He declined to say what would be considered a “positive” response.  “We’ll exercise a judgement on that,” he said.

Touching on the threats by the government to take disciplinary action against the nurses who have been staging one hour protests outside their hospitals, Mr. Yarde maintained that sufficient legal notice waa given to the employer.

Referring to the disbursement of GYD$650 million for the Guyana Sugar Corporation before the 2020 budget was passed, the budgetary allocatio  of GYD$134 million to repaint State House and GYD$95 million for repainting to replace vehicles, he said GYD$150 million for risk allowance for frontline COVID-19 workers.

“All these things contributed to the anger and emotions…these people see themselves not as public servants but public slaves,” the GPSU President said.

He called that amount “measly chicken feed” but he refused to say how much would be a reasonable amount because he did not want to prejudice negotiations.

The union official, who was accompanied by several nurses, said nurses were being asked to take home gowns to wash and asked to reuse disposable masks.

The labour dispute is a hangover from the previous David Granger-led administration that was declared the loser of the March 2, 2020 general elections five months after Guyanese had gone to the polls.

The GPSU President said union representatives had since met the new government and had been asked to put a hold on any industrial action.