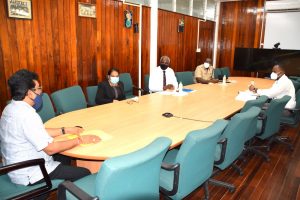 Attorney General Anil Nandlall meeting with representatives of the Financial Intelligence Unit and the Guyana Police Force on the suspected ponzi scheme.

Two weeks after the Competition and Consumer Affairs Commission (CCAC) warned members of the public to be wary of pyramid and ponzi schemes, two persons were Thursday evening detained by police for the alleged operation of such a scheme.

Police Force spokesman, Royston Andries said four persons have come forward so far to give evidence against the couple.

Cuban national Yuri Garcia Dominguez, 34, and Ateeka Ishmael, 32, both residents of Track A Coldingen, East Coast Demerara, were arrested by police ranks from the Fraud Unit and are being questioned at the Criminal Investigation Department (CID), Police Public Relations Officer, Assistant Commissioner Royston Andries-Junor has said.

Workers with Accelerated Capital Firm Inc (ACFI) is also part of an ongoing investigation of alleged fraud, after a report on that company was submitted to Attorney General Mr. Anil Nandlall by the Guyana Securities Council (GSC) identified them to be operating the ponzi scheme.

Mr. Nandlall said in a statement on Thursday that the government had received dozens of complaints from members of the public, in relation to the operations of a financial outfit, located on the East Coast of Demerara. A meeting with the GSC was held where the report of the operations of this agency was presented and the findings revealed.

The report stated that the ACFI is not licensed by the GSC to solicit investments from the public and that the business engaged in by ACFI violates several pieces of legislation across the fiscal regulatory architecture.

“Under the Anti-Money Laundering and Financing of Terrorism Act, it is required for all investors to provide the source of funds and ensure that the financial activities and money laundering risks associated with a customer are properly recorded. The GSC is not in receipt of that information from the application submitted,” Mr. Nandlall said.

The report found that the GSC had written Mr. Dominguez to cease and desist from advising the clients of ACFI that the reason for non-payment to their clients is that the GSC is in the process of granting a license to Accelerated Capital Firm Inc, when in fact an application made on August 5, 2020 was denied.

Mr. Nandall said, “Thousands of Guyanese citizens have enrolled in the ponzi scheme where ACFI claims that it uses a foreign exchange platform to trade and it seems that all aspects of the scheme operate online via training webinars, WhatsApp and emails.The methods of payment used to invest and trade are credit cards or by wire transfer.”

Further, investigations have revealed that local banks have terminated the accounts of both Ms. Ishmael and Mr. Dominguez, and refused their request to open a corporate account as a result of their due diligence and the public notice by GSC in the media.

The GSC had also submitted letters that were sent since October 2019 to former Citizenship Minister Mr. Winston Felix, M.P., Minister of Citizenship and former Minister of Public Security Mr. Khemraj Ramjattan informing them of the suspected illegal investment (pyramid scheme) allegedly operated by the duo. This was done after publications were seen in the newspapers giving notice that Mr. Dominguez had applied to the Minister of Citizenship for naturalization in Guyana.

Mr. Nandlall said approximately 17,000 Guyanese have lost hundreds of millions of dollars after investing with the unlicensed company.

A high-level team which includes the Commissioner of Police, the Governor of the Central Bank, the Head of the Financial Intelligence Unit and Head of the GSC to immediately, adopting a multi-sector approach, plans to investigate the operations of ACFI, with a view, inter alia, of reimbursing monies to the persons who “invested” in the scheme.

Police are asking persons who may have invested with the company to make urgent contact with CID headquarters on telephone numbers #225-8196 and 225-0575.