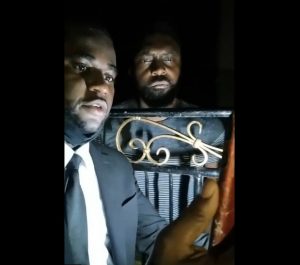 Attorney-at-Law Darren Wade (left) and Christopher Jones speaking with Justice Brassington Reynolds late Thursday night outside Jones’ residence. A request was made for an injunction to restrain the police from searching Mr. Jones premises unlawfully.

People’s National Congress Reform (PNCR) executive member Christopher Jones was Friday released on $100,000 station bail and he was ordered to return to court next Monday concerning a probe into alleged simple larceny.

He is accused of stealing $4 million worth of barbershop equipment.

Mr. Jones has said he got approval to obtain the barbershop chairs and air conditioning units through a state-funded small business fund.

Police during the pre-dawn hours of Friday seized the chairs and other items from his home at Tucville, Georgetown.

His lawyer, Darren Wade, says he will be filing a case in the High Court against the State and the police for breach of several fundamental rights and contempt of court.

Executive members of the PNCR and other supporters turned up outside his home to lend solidarity as police were seizing the items.