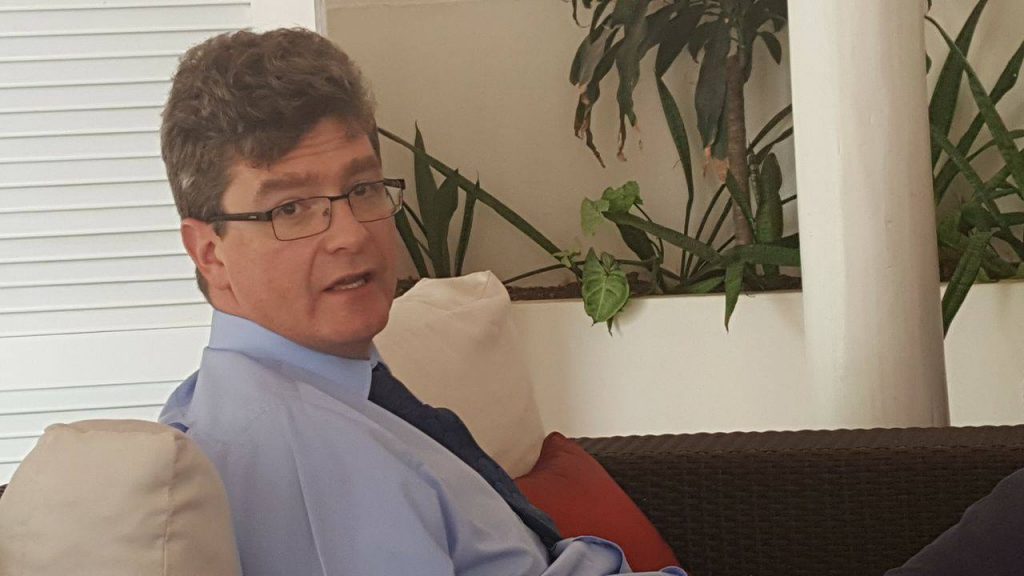 United Kingdom (UK) High Commissioner to Guyana, Greg Quinn on Tuesday said his country would hold the newly-elected People’s Progressive Party Civic (PPPC)-led administration accountable on good governance issues in much the same way as that European country pressed for a declaration of accurate election results.

He said the posture by the UK, United States and Canada has remained consistent before and after the 2015 general elections and would continue to remain the same towards the PPP which was returned to office at the March 2, 2020 elections. The UK envoy said they would continue to make it clear to the new government that they are ruling for all  758,000 people “and that needs to be their number one objective.”

“If we see things that we don’t think are appropriate, we will highlight them in the same way we did prior to 2015,” Mr. Quinn told News-Talk Radio Guyana 103.1 FM/ Demerara Waves Online News just days before he is due to wrap up his extended tour of duty to Guyana.

During the last PPPC administration, leaked US diplomatic cables had revealed reports of poor governance and the alleged close relationship between now convicted drug lord, Shaheed ‘Roger’ Khan, and the Bharrat Jagdeo-led government.  Western Nations had also endorsed domestic calls for local government elections and had successfully called for the removal of then Home Affairs Minister, Ronald Gajraj although a Commission of Inquiry had cleared him of any involvement in State-sponsored death squads. The PPPC administration from 1992 to 2015 had also been sharply accused of discrimination against Afro-Guyanese and corruption.

The UK High Commissioner also said he expects the parliamentary opposition to hold the PPPC administration accountable, despite swirling concerns that it clinged on to power for five months though the national vote recount showed that it lost the general elections by about 15,000 votes.

“To hold this government to account clearly and directly. Every country needs an active and a vociferous opposition. We have in the UK. That’s how the system works and it needs to be and it needs to be clear in holding to account what this current government does and this government should expect to be held to account not only by the opposition but also by civil society, the media and everyone else and governments in every country need to accept the fact that they are there elected by a majority of the population and they must be held accountable for everything they actually do,” said Quinn.

The opposition A Partnership for National Unity+Alliance For Change won 31 seats in the 65-seat National Assembly, the People’s Progressive Party (PPP) 33 seats and the three joinder parties- Liberty and Justice Party, A New and United Guyana and The New Movement – 1 seat.

The UK envoy again fended off criticisms from certain pro-opposition quarters that his country, United States, Canada and the European Union were too interventionist in Guyana’s political affairs. “What I said in 2015 and what I said in 2020 is being governed by this principle of democracy, good governance and the rule of law and that doesn’t change regardless of who is in power,” he said. The records, he said, shows that the UK has spoken quite a lot about corruption and good governance but foreign nations could not compel others to accept its calls.

“Ultimately, of course, it is not in out gift to force anyone down a particular road. I mean we can explain why going down a particular road is the way we think it’s best and but ultimately it takes a commitment by whomever is in government at the time,” he said.  The UK envoy, noting that President Dr. Irfaan Ali has been highlighting some aspects of his governance agenda, said his country would “continue to highlight both publicly and privately if we see things which don’t fit within those principles.”

High Commissioner Quinn said the Western diplomatic community and their Nations took a firm stance on what constituted accurate results based on what had been observed at election day, the Region Four District Office and the outcome of the national vote recount.

He said there was  scope for the government and the opposition to work on a range of governance issues including constitutional reform, electoral reform and reconciliation.  “The last five months have made it clear to everybody that changes are necessary,” he said in reference to the political stalemate over the outcome of the elections.

There were several court battles, pockets of unrest including the stoning of a school bus, injuries to policemen, amid uncertainty about the results.

ANU+AFC continues to maintain that the elections were riddled with fraud, irregularities and  anomalies including evidence of voter impersonation of dead people and others who were overseas on polling day.