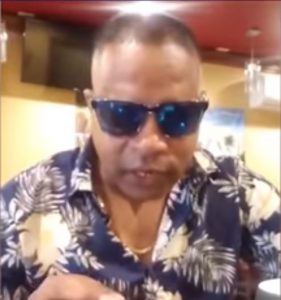 Social Cohesion Minister, Dr. George Norton notes that the singer’s call has been made even as the world grapples with the effects of the deadly COVID 19 pandemic. Mr. Ramkellawan in the video has volunteered to pay the $15,000 fine for anyone found guilty of spitting on Mr. Nagamootoo or Mr. Ramjattan.

“As an artiste, Mr. Ramkellawan has an important role to play in nation building, so for him to be using his platform to incite violence is undoubtedly despicable,” the Minister of Social Cohesion said.

“Mr. Ramkellawan should be promoting harmony and using his popularity to inspire our young people. Of course, it is okay to have strong political views, but regardless of his political persuasion, inciting violence is reckless and uncalled for,” Dr. Norton added.

Dr. Norton is encouraging all Guyanese to act responsibly during this tense political period. Mr. Ramkellawan has been on Facebook calling on the David Granger-led coalition to leave office.

Minister Norton who also holds responsibility for Culture, Youth and Sport believes that Chutney music is a particular genre of music that brings people together in celebration.

“Chutney artistes therefore have a responsibility to use their platform to do just that, not segregate people and provoke violence and crime,” Minister Norton added.

Dr. Norton is encouraging all Guyanese to act responsibly during this tense political period.