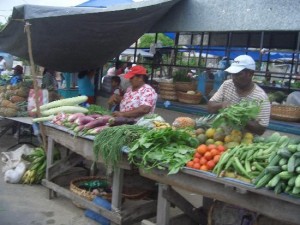 Guyana’s decision to ban incoming international flights, combined with the move by many airlines to reduce passenger flights,  has dealt a blow to non-traditional agricultural exports, officials said.

Because of the coronavirus (COVID-19) pandemic, Guyana closed all its airports to international passenger aircraft on March 19, a closure that could remain in place until August 28 at the earliest. Meanwhile, airlines across the world are “fighting for survival,” according to the International Air Transport Association.

This has all contributed to significant disruption for Guyanese fresh fruits and vegetables exporters, according to the Guyana Marketing Corporation (GMC). The GMC is an agency of the Agriculture Ministry which provides marketing services to stakeholders in the non-traditional agricultural sector.

But GMC’s Public Relations Officer Shevon Nedd told News Talk Radio 103.1 FM/Demerara Waves Online on Wednesday that it must be noted that this increase could be attributed to the 44 percent and 35 percent increases in the export of dried coconuts and coconut water, respectively. Dried coconut exports for the period totaled 3,635 metric tonnes while coconut water was 152 metric tonnes.

“However, there were significant declines in the export of major commodities such as mangoes, pineapples, watermelons, limes, eddoes, wiri wiri pepper and heart of palm for the period January to May 2020, when compared to the corresponding period in 2019,” she explained.

Ms. Nedd said these declines may be attributed to the continued cessation of flights by Caribbean Airlines due to the closure of the airports as a result of measures that were implemented to help mitigate the spread of COVID-19. She also noted that this mode of transport is mainly used to export commodities such as bora, boulanger, achar, thyme, sweet basil, mangoes and wiri wiri pepper to the United States and Canada.

“The Canawaima Ferry Stelling continues to be closed which has directly affected the export of ginger, eddoes and pineapples. Exporters have also indicated that they were having some difficulty in sourcing produce such as watermelons for export,” the public relations officer of the GMC further added.

Asked about the impact COVID-19 is having on the local market and farmers market, Nedd said it is evident that the market prices for fruits and vegetables have fluctuated marginally. However, there have been significant increases in the prices of lemons and oranges and these prices continue to be relatively high.

Meanwhile, with regards to supply, she said there seems to be an abundant supply of fruits of vegetables. But vendors, according to her, have noted that there has been a reduction in the level of market purchases, as persons have started their own kitchen gardens, where they source most of their weekly vegetables.

The GMC official noted too that there have been more pop up stalls along the roadside where persons can purchase both fruits and vegetables from the convenience of their vehicles.