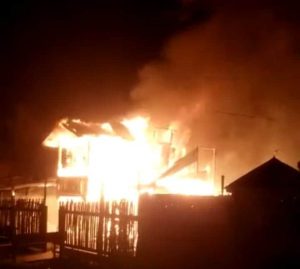 The house at Mon Repos engulfed by flames

A family has nowhere to go after a fire destroyed their Mon Repos house which was built several years ago.

A fire tore apart the house at 179 Fourth Street Mon Repos, East Coast Demerara Wednesday night around 10:30, destroying everything inside.

One day after, Omrow Deopaul,68, says he and his family need help to rebuild and is calling for persons to assist.

Deopaul is a pensioner and suffers from several health conditions. His adult son and daughter Kaloutie and Deopaul Junior, and a 7-year-old great grand child were living with him when tragedy struck.

The house which had all the basic amenities of a gas stove, fridge, television and stereo set, and beds has instead been reduced to rubble.

The man’s daughter told News Talk Radio 103.1 FM/Demerara Waves Online that the fire might have been electrical in origin, explaining that she warned her father to tend to a faulty bulb that was “sparking.”

Samaroo said when they were alerted by the smoke, neighbours in the street woke up and quickly started a water brigade, but despite these efforts, the fire spread quickly destroying everything in its way.

Upon arrival, the Fire Service managed to save the nearby house, although some damage  was done to the windows and water tank.

Deopaul said he and his family does not have any place to sleep, nor do they have food and clothing. The family is asking for donations of food, clothing, cash and even material to help rebuild.

Persons willing to make a donation could contact the family through telephone 220-6922.