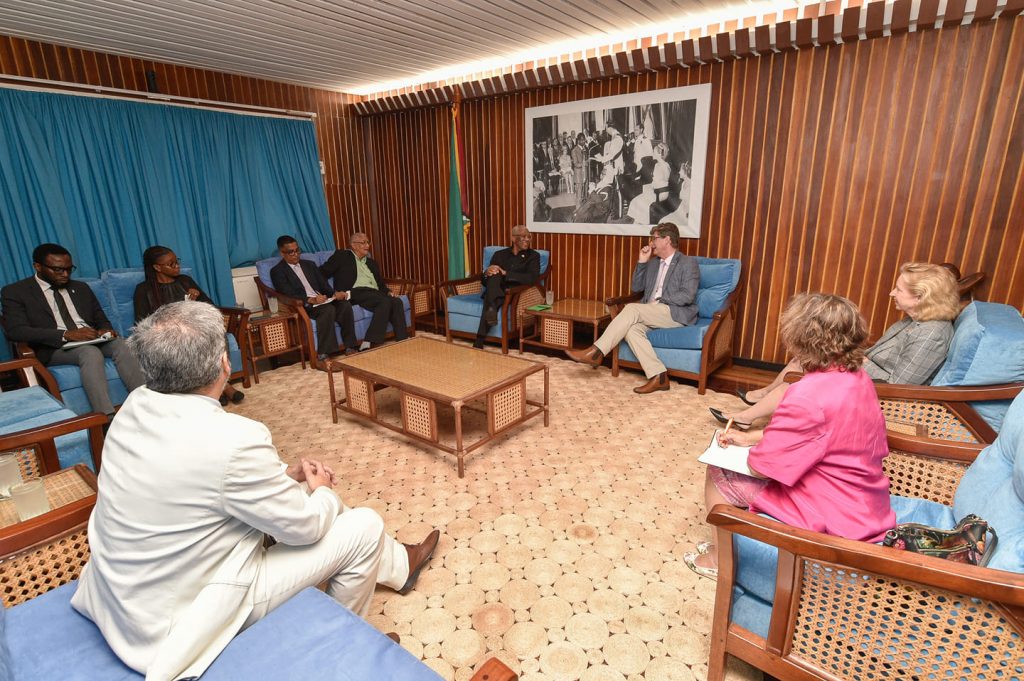 President David Granger, on Friday afternoon, briefed diplomats from Britain, the United States of America, Canada and the European Union. The Head of State, in his remarks, told the ABCE Diplomats that at every step of the electoral process he has complied with the laws of Guyana. The President said Monday’s General and Regional Elections were orderly and were in full compliance with the law and the Constitution. President Granger assured that at no time did he feel the Commission was incapable of conducting fair elections. He reminded that it is not the role of the executive to interfere in the work of the Commission.

Even as High Court marshalls on Friday made efforts to serve court orders on top officials of the Guyana Elections Commission (GECOM) officials for a verification of results for a key government stronghold illegal because they did not follow established rules, major western nations warned President David Granger of the A Partnership for National Unity + Alliance for Change (APNU+AFC) against remaining in power unconstitutionally.

“We call on President Granger to avoid a transition of government which we believe would be unconstitutional as it would be based on a vote tabulation process that lacked credibility and transparency,” United States Ambassador Sarah-Ann Lynch; British High Commissioner, Greg Quinn, Canadian High Commissioner, Lilian Chatterjee, and the European Union Ambassador, Fernando Ponz-Canto said in a joint statement.

The diplomatic envoys, several of whom met with Granger Thursday afternoon, expressed deep concern over “credible allegations of electoral fraud which may influence the results of this election.” “We call on all to ensure proper procedures are in place to yield a credible election result. A fair and free process is vital for the maintenance and reinforcement of democracy in Guyana,” the diplomats said.

Counting agents for the opposition People’s Progressive Party (PPP) and several small newcomer political parties were Friday morning blocked from filing objections and requests for recounts of the results from one of the Returning Officers.

Ambassadors for the United Kingdom, United States and the European Union jointly criticised the Returning Officer’s declaration of results for Demerara-Mahaica, the highest populated region. “Based on our observation of today’s GECOM proceedings at their Region 4 office, and the fact that the full count was not completed, we question the credibility of the Region 4 results published by GECOM (Guyana Elections Commission),” they said.

The EU Observation Mission indicated that the results declaration by the Returning Officer before the required tabulation process was in violation of the law. “We therefore urge the Guyana Elections Commission to resume the tabulation of results for Region 4 in compliance with Section 84 of the Representation of the People Act,” the EU Observers said.

The election observers representing the 53-nation Commonwealth said final election results were not yet completed and verified in keeping with procedures and relevant legal and statutory provisions. “We strongly urge the Guyana Elections Commission and all parties involved to ensure the process properly follows the legal steps dictated by the laws of Guyana and is in line with the country’s international commitments,” the Commonwealth observers said.

The United States-headquartered Carter Center said the results could not be deemed transparent and credible. “What they want is to win in a credible transparent way and so we urge GECOM and we urge the political parties to come together and to pay close attention to how these results are going to be verified in a transparent way and thus far we have not seen that transparency,” they said.

The opposition PPP late Thursday secured High Court orders compelling GECOM to verify the results before they are verified. However, up to Friday morning, they were not served on the GECOM Chairman, Claudette Singh and Chief Elections Officer, Keith Lowenfield because the High Court marshalls could not locate them at their offices.