US calls for respect of election results 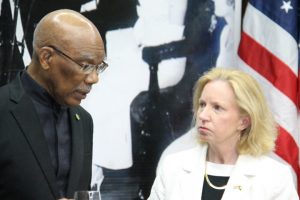 President David Granger and US Ambassador Sarah-Ann Lynch chatting after she presented her credentials to him in 2019.

The United States has appealed to all the political parties to respect the outcome of the general and regional elections.

“After the people of Guyana have spoken, the United States stands ready to work with the next democratically elected administration, and I encourage all parties to respect the outcome,” American Ambassador to Guyana, Sarah Ann-Lynch said in a statement.

Just back from a worldwide U.S. ambassadors conference in Washington, the American envoy said there is great interest in free, fair and peaceful elections.

Ambassador Lynch encouraged all registered voters to exercise their franchise in a peaceful manner and to allow others to do the same. This is the second time in less than one week that a senior diplomat in Guyana has called for the results of the elections to be accepted.

The Guyana Elections Commission (GECOM) says there are 661,378 registered voters, all of whom are eligible to cast their ballots at 2,339 polling stations across the country.

Final election results are not expected before Friday, although the commission, under law, is allowed 15 days to do so.

The elections appear to be a straight fight between 74-year-old David Granger’s A Partnership for National Unity+Alliance For Change and 39-year-old Irfaan Ali’s People’s Progressive Party.