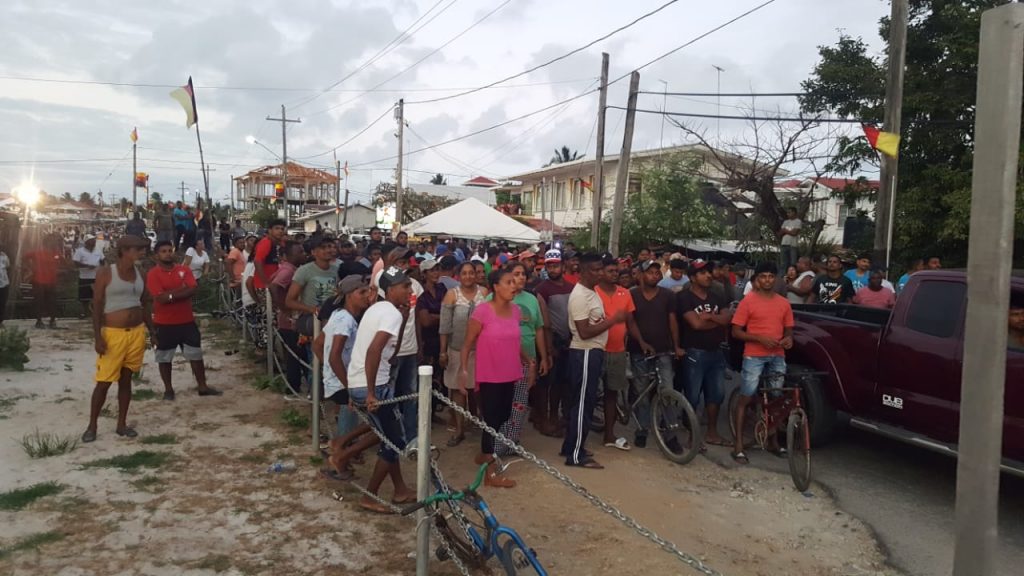 Residents of Mon Repos on the protest line.

The polls in Guyana’s general elections were expected to officially close at 6 o’clock Monday evening, but after largely peaceful voting during most of the day riot police were called out at Mon Repos Village, East Coast Demerara, to keep two factions apart over allegations of electoral fraud.

Riot police, armed with pellet guns, rubber bullets and teargas, were deployed to the area since Monday afternoon. However, they have been patiently asking the protesters on both sides to disperse and back away from the area.

“Those people have to go back to their communities and these people will go home,” said PPP Executive Member and East Coast Demerara campaign manager Anil Nandlall, adding that “this is irresponsible behaviour.”

Saying that the incident was causing unnecessary tension in the country, Nandlall, at about 6:45pm called on the leaders of the residents of Beterverwagting, Triumph, who have converged at Mon Repos to show leadership and urged their supporters to go home.

As night fell, the tension intensified again and the crowd on both sides built up.

Police sources said a number of flashpoints surfaced along the East Coast Demerara during Monday but the one at Mon Repos was so far the most testy. From late in the afternoon, supporters of the opposition People’s Progressive Party and the incumbent A Partnership for National Unity+Alliance For Change (APNU+AFC) traded verbal abuse that had been triggered by allegations of attempted voter fraud.

APNU+AFC supporters converged near the school after word surfaced concerning two men named Krishna Persaud. One of them had already voted and his name crossed off by GECOM and political party agents.

The other Persaud said when he went to vote, police were called in because the records showed that he. bearing the same name, had already voted.

Nandlall and the PNCR/APNU+AFC’s Amna Ally and Basil Williams had a long on-the-spot discussion. Eventually, that ended with both sides agreeing that the issue will be left for the Guyana Elections Commission to decide.

PPP General Secretary, Bharrat Jagdeo has since accused the People’s National Congress Reform-dominated APNU of engineering tension because they will be defeated. GECOM is expected to provide election results with a clear pattern by either Wednesday or Thursday.

A woman was also arrested allegedly for attempting to vote twice. The incident and related matters were observed by election watchers from the American Chamber of Commerce-Guyana, and the European Union.

The Head of the Organisation of American States (OAS) election observation mission  Bruce Golding earlier Monday described voting in Guyana’s general elections as “smooth” and peaceful despite a few hitches.

He hopes that every effort will be made by the Guyana Elections Commission to deliver election results as early as possible, but at the same time he was aware of the vast and rugged terrain from which ballot boxes and results would have to be transported by air, land and water.