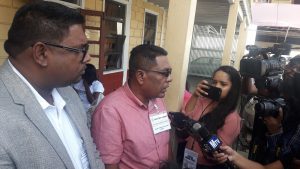 Presidential candidate for the main opposition People’s Progressive Party (PPP), Irfaan Ali on Friday dismissed claims by President David Granger that polling places at obscure and politically biased private residences had resulted in disenfranchisement of voters when the PPP had been in government.

But PPP Executive Secretary, Zulfikar Mustapha said his party never played a role in selecting polling stations. “We never identified any places before for polling stations. That was GECOM’s authority. We never had anything to do with it so this is very strange after many years these assertions are coming up,” he said.

Granger earlier Friday, at the Guyana Defence Force (GDF) headquarters, sought to suggest a linkage between the selection of private residences and the PPP’s tenure in office. “In the past when the PPP was in government, it was apparent to us in the opposition then that some of the private residences were so obscure that many of our supporters couldn’t find them and, in fact, some of them were changed at the last moment,” he said.

Granger, who is also the presidential candidate for A Partnership for National Unity+Alliance For Change (APNU+AFC), said neither his coalition parties nor its election commissioners have played any role in reducing the number of private residences that will be used as polling places on March 2. At the same time Granger expressed confidence that such a situation would not happen again. ““There is no attempt on the part of our commissioners or our parties to disenfranchise anyone but there were numerous abuses in the past in terms of the selection of private residences. Some of them were obscure, some of them were in houses or active political advocates and many persons not associated with the administration at that time were disenfranchised. I am very confident it will not happen. I am confident that the Elections Commission, which is in charge of elections, will make the right decision,” he said. 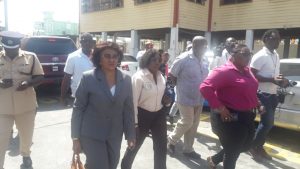 Guyana Elections Commission (GECOM) Chairman, Retired Justice Claudette Singh said the number of polling places at private residences have been reduced in keeping with a recommendation by previous Carter Centre elections observers. “Those have been reduced because they are using public buildings. It’s not that the polling stations are removed in the area; it’s just the private residences; they are moving away from those,” she said.

Singh said “I am not aware” of the PPP’s claims that GECOM was engaged in voter suppression, PPP supporters would have to travel long distances to government buildings and in some cases would have to go to coalition strongholds to vote which can trigger unnecessary tension.

GECOM Chairman said decisions were taken before she was appointed Chairman last year July to scale down the use of private residences. But the PPP Executive Secretary said up to one month ago, GECOM had not changed the polling places and it was only after he had secured a list of them that he realised there were many changes.

She did not rule out GECOM discussing concerns about the polling places.