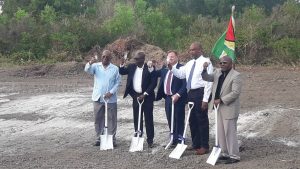 Finance Minister Winston Jordan on Wednesday boasted that Guyana’s economy last year grew by 4.7 percent despite poor performances in traditional sectors, and that investors continue to ink concrete deals regardless of the political environment.

Addressing the symbolic start of the construction of two major hotels on 10 acres of land at Ogle, East Coast Demerara, he said last year’s economic growth was the highest since 2014 and shows that the economy was less dependent on poor performers – sugar and bauxite.

Instead, he credited rice, construction and tourism for the good economic performance in 2019. “If that doesn’t speak to the economy weaning itself off of its traditional products and veering into a new direction, I don’t know what else will be a lead,” said Jordan, a former budget director.

The finance minister highlighted that the economy has been registering more than 3 percent for the past several years except for one year when the gross domestic product was 1 percent. “So we have been building the economy while we are attempting to diversify and correct it and we have tried to put in place a regime that will be attractive enough to encourage and attract both local and foreign investors,” he said.

In clear reference to the passage of the opposition-sponsored no-confidence motion that had been passed on December, 2018, and the string of court actions and protests, Jordan expressed satisfaction that foreign investors had not been deterred from ploughing millions of dollars in Guyana. “I am supremely happy that we are attracting investors in spite of the conditions that exist today. Investors like political stability and in the past, investors would have shied away from sod-turning 10 days before an election. They might come, gaff and thing and gone and investment would have been running out of Guyana. The exchange rate would have started dancing but as you look around, all of those features 10 days before an election are not there,” he said.

Wednesday’s sod-turning ceremony was the the second in one week for three major branded hotels. First Bauxite Corporation will also be formally commissioning its mine at Bonasika, Upper Demerara River, an agro-processing farm at Wales, West Bank Demerara, and a number of other projects are on stream.

Seven investors, including Guyanese-American Edmond Braithwaite, are investing US$100 million in the construction of two hotels and other related facilities, including a solar farm, on 20 acres of land that they bought at more than GYD$26 million per acre.

Seizing the opportunity to take a shot at the now opposition People’s Progressive Party (PPP), under whose administration the Marriott-branded hotel had been constructed with state funds and a US$30-million-loan from Republic Bank, Jordan said none of the state’s monies were being spent on these investments.

Instead, he said private sector entities have conducted their analyses and have seen good business opportunities. “Governments should ensure, yes, that we create the conditions for them to make that profit but also that we have the regulations in place to, for example, protect our environment, protect our labour and our workers, grow our economy, pay the relevant taxes and so forth. That is what we are supposed to be doing, not taking taxpayers’ money and building hotels, not borrowing money at whatever commercial rates and building hotels. That is the business of private investors and if they see an opportunity and they do their internal analyses and it turns out that profits (are) bigger than (the) internal rate, they will invest […] when you go to the lengths to which we had gone to build the Marriott,” he said.

He lamented that the then-People’s Progressive Party administration had sold out the profitable shares in the Guyana Telephone and Telegraph company and used taxpayers’ money under the National Industrial and Commercial Investments Limited while at the same time repaying the loan. “That is the model that will be followed by this government,” he said.