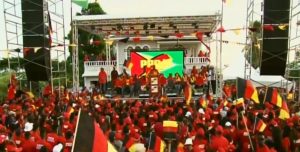 President David Granger’s reference to his constitutional right to revoke the Guyanese citizenship from persons who are nationals of other countries is now being used by the People’s Progressive Party (PPP) to galvanise overseas-based supporters to return home to vote in next month’s general elections.

Addressing a campaign rally in Stewartville, West Coast Demerara, on Sunday evening, PPP presidential candidate, Irfaan Ali, sought to paint Granger as someone who is insincere to overseas-based Guyanese. “Granger said he love [sic] the people of the diaspora. He love [sic] them. He said he would bring them in government and then recently he said he will take away their dual citizenship. What nonsense! What nonsense! What hypocrisy! But this is the nature of this government – a bunch of hypocrites!”

General Secretary of the PPP, Bharrat Jagdeo also weighed in on the issue, telling party faithfuls that the power to revoke Guyanese citizenship has always been in Guyana’s constitution but none of the PPP administration presidents had ever used that provision.

“It shows the undemocratic nature of this government so comrades they are very, very worried. The writing is on the wall,” Jagdeo said. He seized the opportunity to call on supporters to encourage their relatives and friends abroad to come back to vote. “Call them and tell them to come home and vote on March 2nd if they are on the list.”

The incumbent A Partnership for National Unity+ Alliance For Change (APNU+AFC) has also been wooing its supporters to come back and vote.

There is speculation in some quarters that President Granger highlighted that provision last week because he might be considering revoking the Guyanese citizenship of Charrandass Persaud who had voted for a PPP-sponsored no-confidence motion in December, 2018, before fleeing to Canada on his Canadian passport.

Granger pointed to his constitutional right to scrap the Guyanese citizenship of dual nationals at a time when there has been much debate over whether Dr. Vishnu Bandhu, Lenox Shuman and Dr. Valerie Leung had falsely declared on Nomination Day that they were not dual citizens.

Previous: OPINION: In the matter of Gary Best, the president has no choice, but to act
Next: Granger urges youths not to smoke, cultivate certain plants