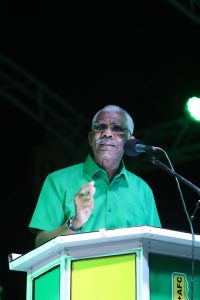 A Partnership for National Unity+Alliance For Change (APNU+AFC) presidential candidate, David Granger, Sunday night sought to discourage youths from planting what he strongly suggested to be marijuana and instead get into value-added agriculture and pursue educational opportunities.

Urging youths against idleness like smoking and ‘liming’, he said Region 10 (Upper Demerara-Upper Berbice) has a number of worthwhile job opportunities in manufacturing areas such as wood products, gold jewellery, furniture and beverages, as well as agriculture.

Earlier, in his address to a rally in his political stronghold, Granger appeared to have hinted at heavy marijuana smoking at Bay Rock, Linden, where the rally was held. “I smell something over there just now. I thought I was in Jamaica. I feel so high, I nearly touch the sky. You have boundless agricultural potential,” he quipped.

Guyana has given a commitment to the Caribbean Community, following a regional report on marijuana use, that it would pass legislation to soften the penalties for the possession of small amounts of marijuana for religious use. A commission of inquiry into a fire at the Georgetown Prison had cited overcrowding due to the large number of inmates on remand for possession of small amounts of marijuana.

The Alliance For Change (AFC) and the Rastafarian community had been in the forefront of calls for the Narcotic Drugs and Psychotropic Substances Act to be amended to remove jail terms for marijuana possession of up to 30 grammes or less.

The President called for reviving the Guyana National Youth Corps and the establishment of more technical institutes to equip young people to work in the oil and gas industry. Granger acknowledged that many youths were not employed or in education and training institutions, but he promised that government would facilitate them. “We will provide a safety net to make sure they don’t hit the ground,” he said. “Young people can go into manufacturing and we will help these microenterprises so that Guyana starts to export the goods which it produces, the agro-processing,” Granger added.

He also encouraged young people to take advantage of the Sustainable Livelihood Entrepreneurial Development (SLED) programme which has already assisted 2,500 young people to start up businesses and create jobs. “I’d like any young people who are unemployed, who are not in school and who are intelligent enough and willing enough to get involved in business to apply for a SLED grant,” he said.

The President noted that the Linden Enterprise Network Inc has gotten GYD$155 million from government, and since then GYD$326 million for 70 loans have been disbursed to help mainly women get into jobs. Other benefits, he noted, included a 70-percent increase in wages and salaries.