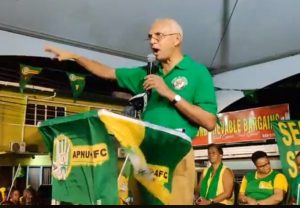 The incumbent A Partnership for National Unity+Alliance For Change (APNU+AFC) is now eyeing overseas-based Guyanese to return home to vote on March 2, 2020, after at one stage insisting that the names of migrants must be removed from the voters list.

APNU candidate, Ronald Bulkan declared this position Sunday night at a public meeting held at the Kitty Market Square, Georgetown. “The next area I would like to speak to help any undecided that we might have among us here tonight and those who are listening in other parts of Guyana, those who might be abroad but planning to come back to participate in these historic elections, the mother of all elections because…the countdown has started,” he said.

Elections Commissioner, Vincent Alexander told News-Talk Radio Guyana 103.1 FM/Demerara Waves Online News that the seven-member Guyana Elections Commission (GECOM) did not reach consensus on flagging the names of registrants who have not collected their national identification cards dating back to 2008 and later.

Three of the pro-coalition commissioners and the GECOM Chairman, Claudette Singh had wanted to use the non-collection of identification cards as a means of verification to remove the names of deceased and migrants from the voters’ list.

But Alexander said there appeared to be an implicit trade-off between the opposition-aligned commissioners’ demand that the 6,000 odd names of new registrants be flagged and the pro-coalition commissioners who had wanted to retain the names of those suspected to have migrated.

The General Secretary of the opposition People’s Progressive Party (PPP) has already encouraged his overseas-based supporters to return to Guyana to vote in March.

The Guyana Court of Appeal is yet to rule on whether the names of non-resident Guyanese can be removed from the National Register of Registrants from which persons of voting age – 18 years and older- are extracted to create the voters’ list.

Previous: OPINION: To political aspirants who hedge and delay: count the cost
Next: Four held for attempted murder of pensioner after son allegedly stole gold chain