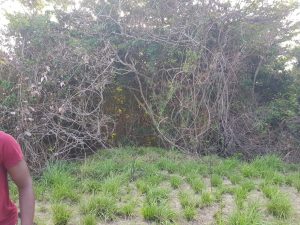 The Takatu River area where the body was found.

The badly decomposed body of a 16-year-old Brazilian boy was discovered on the Guyana side of the Takatu River, days after he did not return to his home in the neighbouring Brazilian township of Bonfim in the state of Roraima, Guyanese police said.

Police in Guyana believe Oduan Macio Junior Da Silva, a student, was killed because “suspected stab wounds were seen on his right side neck, left side upper chest and lower right side abdomen.”

No one was arrested.

Despite the fact that his body was decomposed beyond facial recognition, it was identified by his mother Michela Simon Da Silva by way of “Macio” and a fish symbol which are tattooed on his right side thigh and left hand.

The 46-year-old woman, who is a cook in Bonfim, told Guyanese police that she was told that her son had left Brazil in the company of Bruno Militon and Lisbert Militon to play football in Bonfim on December 20, 2019. She said she was also informed that her son and the Militons left Brazil to enter Lethem to party on the same date at about 7 p.m.

She said she never saw her son again and reported it to the federal police in Bonfim. The woman said her son’s body was found at about 3:30 p.m. on the Guyana bank of the Takatu River during one of several searches.