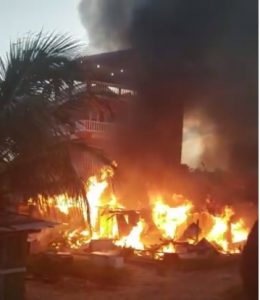 The fire occurred at about 5:45 p.m. at Ogle Street in one of the shacks used by fishermen and boat owners to store their engines and other items.

Investigators were told that at about 5:15 p.m. one of the fishermen was told that the small wooden structures were on fire.

Two other occupants were not around at the time of the fire.