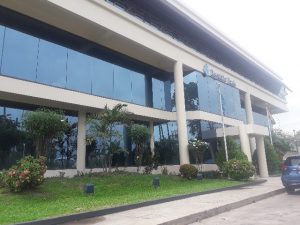 About three hours after the Bank of Guyana said it would be pressing Republic Bank Guyana to compensate customers for inconvenience stemming from an upgrade of its system, the Trinidad-headquartered financial institution said it had days ago already decided to do so.

“Importantly, at the Bank’s Annual General Meeting on December 9th 2019, Chairman, Nigel Baptiste, announced that the Bank is working on measures to compensate customers for the inconvenience experienced as result of the conversion to the new banking platform,” Republic Bank said in a statement issued shortly after 5 p.m.

Republic Bank reaffirmed its commitment to fully resolve all new banking system related issues by mid-December as earlier indicated. This is the second time that the bank has responded to concerns raised by Guyana government authorities about the long queues after the upgrade of the banking system.

Earlier Wednesday, Governor of the Bank of Guyana, Dr. Gobin Ganga said Republic Bank Guyana Limited might be asked to compensate customers who have been affected during the past several weeks. “We are hoping that when this new platform is put in place that they’ll be able to compensate the customer some way or the other for all the discomfort they would have caused,” he said. Pressed on whether the law allows the central bank to punish commercial banks, he said “no” but he intended to first use moral suasion.

He indicated that amendments would be made to relevant laws to protect customers by strengthening the powers of the central bank.

The Bank of Guyana governor plans to meet with members of the Guyana Association of Bankers on Friday when he is expected to caution commercial banks that they can be penalised for certain occurrences that adversely impact the quality of their service or expected services that are not being provided. The Bank of Guyana governor says he can punish the commercial banks legally by issuing circulars or making regulations.

Republic Bank is reaffirming its commitment to fully resolve all new banking system related issues by mid-December as earlier indicated.

Republic Bank said, “With ongoing emphasis to improve transaction efficiency, customers can access their accounts via the Bank’s Automated Teller Machines (ATMs) where a higher single transaction limit of $100,000: is now available. Eighty-two percent (82%) of our Point of Sale Terminals are now operable, facilitating customers’ payments at merchants, while we continue to address those outstanding for earliest availability. In-branch, resources have been redirected to ensure maximum support; while our new Swipe Card feature will greatly reduce the need for completion of vouchers for some withdrawals and deposits. Payrolls received to date have been processed and we are utilizing currently four (4) payroll processing options to ensure that our valued customers have on time access to their salaries and bonus payments. Wire Transfers are also being processed. Our customer education efforts and Call Centre support are ongoing, even as we note the steady reduction in the demand for these.”

But, the central bank governor rejected the steps being taken by Republic Bank, saying it has been “very, very slow”. “That very best is still not what we are accepting and so we are ensuring that they are continuously addressing this issue to make it is more accessible to the public,” he said.

Republic Bank says customer focus remains their priority and “we are committed to ensuring that any inconvenience experienced by our customers and stakeholders is resolved soonest.”