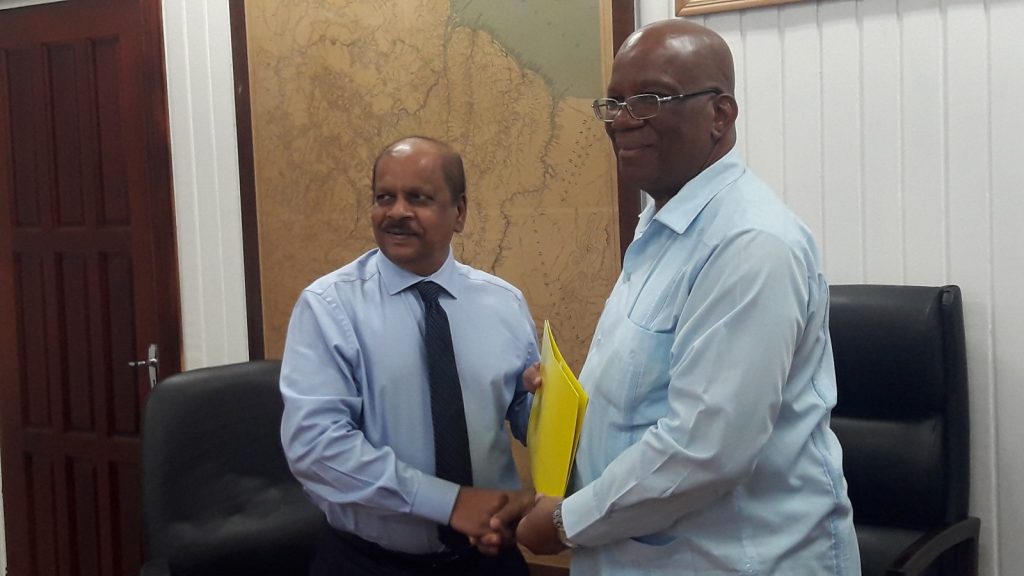 Governor of the Bank of Guyana, Dr. Gobin Ganga and Finance Minister shake hands with a copy of the operational agreement for the Natural Resources’ sovereign wealth fund.

Guyana’s central bank, the Bank of Guyana, on Wednesday formally took over responsibility for managing the Natural Resources Fund also known as the sovereign wealth fund (SWF), even as Guyana awaits word from the Federal Reserve Bank of New York (or the New York Fed) on due diligence where the monies will be deposited.

Governor of the Bank of Guyana, Dr. Gobind Ganga says the New York Fed was selected since 2017 because of its integrity and also its track record in doing business with Guyana. “Let me tell you, you want to pit your money in the safest possible institution. There are a number of them but the Fed is one of them. The Fed was approached long back,” he told reporters at a news briefing following the signing of a memorandum of understanding between the central bank and the Ministry of Finance.

In terms of the interest rates, he says the monies will be invested in different classes of assets aimed at earning about three percent per year long-term.

The New York Fed has not yet approved the Bank of Guyana application to set up the SWF account because it is conducting a routine due diligence in keeping with international rules that guard against financial crimes, Finance Minister, Winston Jordan says. “Overall, what they want to know that this is a credible activity that we are seeking to do so there are different pieces that will lead to the credibility is what they will ask,” said Jordan.

He said the operational agreement between the central bank and the Finance Ministry’s expected monthly amount to be transferred is “to make certain that it’s above aboard”.

The central bank governor says the memorandum of understanding with the Ministry of Finance covers several aspects of the daily operation of the SWF. These include receiving deposits, making withdrawals, investing the fund, and accounting for all deposits and withdrawals.

Dr. Ganga says the Minister of Finance will have to give the Bank of Guyana a written notice of five days to transfer monies from the sovereign wealth fund to the Consolidated Fund.