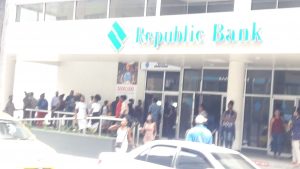 A now customary all-day queue at one of Republic Bank (Guyana) branches in Georgetown since the system upgrade.

The Guyana government on Thursday took Republic Bank to task over the long delays customers are experiencing in transacting business, even as the Trinidad-headquartered financial institution admitted that there are problems with its upgraded system and promised to fix them by mid-December.

Director-General of the Ministry of the Presidency, Joseph Harmon said Minister of Finance, Winston Jordan would be taking up the matter when he returns from overseas travel duty.

He expected that Mr. Jordan and the Bank of Guyana – government’s financial institutions regulator – to address the situation, and that government would “not sit idly by and see people can’t get their salaries and things like that.” “That is wrong. The bank has to do something better than they are doing right now,” he added.

Republic Bank Guyana earlier Thursday apologised and said it was putting systems in place to ease some of the problems that its customers are enduring. “We would like to assure our clients that we are gradually resolving the challenges and we expect to have the issues fully resolved by the middle of December 2019. In the meantime, we are putting various additional measures in place to make it easier for clients to access both the information and the people needed to resolve any individual concerns,” the bank said.

The bank assured customers that, despite the hiccups, their banking information is secure and is not vulnerable to hacking. “Notwithstanding these challenges, we would like to assure clients that there have been no challenges with respect to the integrity of our data or the security of our new IT systems. Both the data and system infrastructure have been designed to satisfy the latest international standards re data protection and cyber security,” the bank said.

Previous: Parliament unlikely to be dissolved by December 2 -Harmon
Next: BREAKING: Firebomb attack on Transport and Harbours headquarters