No place for lip-service against corruption, time for action -UG best graduating student 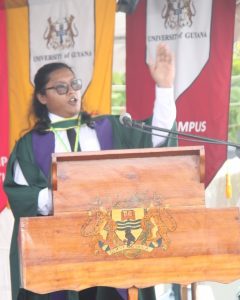 University of Guyana (UG) 2019 valedictorian, Shane Rampertab Saturday morning issued a stirring appeal for graduates to play a major role to fight corruption as the country prepares for the start of commercial oil production next month.

Addressing the first of two graduation ceremonies at the Turkeyen Campus, he said his call for an end to corruption was in the context of the country being on the “cusp of what may be the most influential national development in our time – yes, the big oil”.

Rampertab said that, as UG graduates, they have a responsibility to ensure that the country’s oil industry does not fall prey to corruption and against the expectations of Guyanese. “We cannot allow ourselves to fall victim to corruption. We cannot fall into the trap of nepotism and favouritism,” he said to resounding applause.

The UG valedictorian urged Guyanese to be change-agents against corruption instead of merely paying lip-service. “To root out corruption, we must say ‘no’. We must say ‘this stops with us'”. And it’s easy to say corruption is rampant and it might seem useless to do something about it but I must remind you that we cannot afford to be complacent,” he said.

Rampertab warned that complacency breeds stagnation and “nothing is more dangerous and counter-intuitive to development”. He said UG graduates have to be change-agents instead of dwelling on promises and expectations. “It’s something I learned the hard way while I was here. If you want something to get done, you have to do it yourself. This is especially applicable to us now as we move from UG and go into our respective fields. It is not enough for us to sit idly (by) and complain. We need to be the pioneers of our future,” he said.

There have been lingering concerns about whether Guyana has secured the best deal in its production sharing agreements with major multinational oil companies. The government’s State Assets Recovery Agency (SARA) has also publicly stated that it has begun probing the award of oil concessions by the previous People’s Progressive Party Civic-led administration.

Then Natural Resources Minister, Robert Persaud has publicly denied benefiting financially from any of those deals.