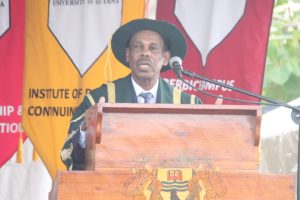 Chancellor of the University of Guyana, Professor Edward Greene.

Fresh from his installation at Chancellor of the University of Guyana, Professor Edward Greene on Saturday appealed to graduates to help transform the country’s political culture and improve race relations.

Addressing the Convocation at the Turkeyen Campus, he called on the graduates as they leave the campus to use their investment and accomplishments to dismantle decades-old divisiveness in their communities and the wider world.

“Your accountability to the future is to help and break down those barriers of divisiveness inherited from generations that have left the scars of racial conflict and discord; of dismantling the coarseness that has crept into our social discourse and the rupturing incivility that has become ingrained into our political culture,” said Dr. Greene, a Guyanese international civil servant who has worked with the United Nations system in various capacities.

Greene, who is a former Assistant Secretary-General (Human and Social Development) of the 15-nation Caribbean Community (CARICOM) was installed as Chancellor of UG moments before he addressed graduates.

Dr. Greene’s call for graduates to help create a racially-politically cohesive society and put an end crassness comes as Guyana streams ahead to general elections scheduled for March 2, 2020. The two major political parties draw the bulk of their support almost evenly from African and Indian Guyanese.

His comments also came weeks after the UG administration had frowned on racially insensitive and distasteful remarks on social media by a young UG student.

Professor Greene hoped that during their studies at the UG , the graduates “have come to the view that sometimes the only thing that’s important really is just letting each other know that we are here, reminding each other that we are part of a larger self” as they move into the world to interact with a cross-section of colleagues and friends, and collaborate and compete for ideas.

“It is not about individual egos. It is about collective leadership that must be put to the benefit of this country. Yours is the generation of graduates fortunate to emerge at the cusp of a projected buoyant economy in this Dear Land of Guyana,” he said in clear reference to Guyana’s emerging oil and gas economy.

Over the past several months, governing and opposition politicians have uttered and engaged in a number of activities that have raised eyebrows. 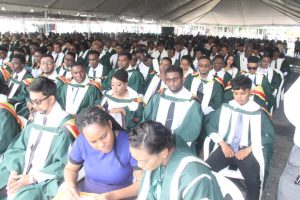 A section of the 2019 University of Guyana graduates.

Junior Labour Minister, Keith Scott has called Indigenous Amerindians “avaricious”; and Health Minister and Chairman of the People’s National Congress Reform, Volda Lawrence had told a party meeting that jobs would be given to only her party’s supporters.

The opposition People’s Progressive Party’s parliamentarians, including Opposition Leader Bharat Jagdeo, had heckled and raised placards in the Parliament Chamber as President David Granger had been addressing the legislature. Similar treatment had been meted out to Mr. Granger as he had addressed a private sector luncheon. Reacting, Mr. Granger had remarked that I hope that the intellectual authors of the disorder would be able to stop what they have started.” The President had also labelled the opposition actors “vulgarians” and “hooligans”