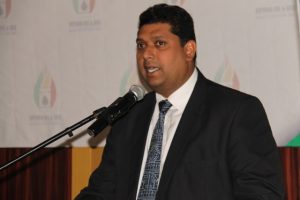 Trinidad and Tobago’s former Energy Minister, Kevin Ramnarine agrees that Guyana’s business community should demand that foreign oil and gas industry companies buy more goods and services locally, but at the same time he sees a role for partnerships between Guyanese and Trinidadian companies.

Speaking with local media representatives on Thursday via Skype, Ramnarine said if international oil companies are not kept in check they will source most of their goods and services from overseas.

“If you just lay back and allow the multinationals to do what they want to do, of course, they will naturally gravitate towards getting their services from wherever they want to get it outside of Guyana so I agree with the approach of the Private Sector Commission and other persons in Guyana. You have to put your foot down when it comes to local content and you have to make a case for the maximisation of the local content in Guyana so as much as possible that could be done in country, should be done in country,” he said.

Ramnarine was interacting with local journalists at the latest in a series of morning interactive sessions organised by British journalist, John Mair, at the Georgetown Club in Georgetown.

He notes that Trinidad’s local content policy is enforced by provisions in the production sharing agreements with oil companies.

But there has been a debate in that twin-island republic about whether local content should be made law or retained in a policy to give government some flexibility.

Against the background of concerns by the local private sector that Trinidad and Tobago businessmen are coming to take over Guyana’s oil sector, Ramnarine recommends that joint ventures be established.

“From an investment point of view, I think naturally people in Trinidad would see opportunity in Guyana and Guyana, being part of the Caribbean Single Market, part of Caricom and so on; naturally you would expect that Trinidad businessmen would come seeking opportunity in Guyana. The point I would make is if they do that, it should be done in partnership with Guyanese businessmen so that we build the capacity of the Guyanese business community,” he said.

Trinidad and Tobago energy sector players have been boasting that they have more than 100 years of experience as an oil producer and so their model, techniques and internationally-recognised standards are what they can transfer to Guyana.

On the other hand, sections of Guyana’s business community and a former Natural Resources Minister, Robert Persaud have openly attacked the Caribbean Community Single Market and Economy, saying that their country have been long-time victims of non-tariff trade barriers.

Persaud has gone as far as describing Trinidad and Tobago businesses interests in Guyana as “predatory” and has called for a discourse on the Treaty of Chaguaramas that governs the CSME.

Previous: AFC will decide future in coalition after apparent rejection of Ramjattan as Granger’s running mate
Next: T&HD sailor killed during argument