“No, Trinidadian companies are not coming to take over”; Guyana can learn global oil industry standards from TT– Energy Chamber of Trinidad Tobago assures 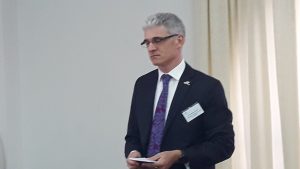 The Energy Chamber of Trinidad and Tobago (ECTT) on Wednesday sought to dispel concerns that businesses from that twin-island Caribbean Community (CARICOM) member state are coming to Guyana to dominate the oil sector, instead saying that they are grasping business opportunities hinged on 100 years of experience and international safety standards.

ECTT Chief Executive Officer, Dr Thackwray Driver rubbished claims by sections of Guyana’s business community that Trinidadians are coming here in droves to take over the oil sector. “No, Trinidadian companies are not coming to take over. Trinidadian companies are coming because they are seeing business opportunities in a fast-developing industry where there is a huge amount of opportunity which exists for everybody,” he told reporters after one of the ECTT executive members raised concerns during the “Guyana Safety Forum 2019” held at the Arthur Chung Conference Centre under the theme “Building a robust safety culture for private sector development”.

The event was mainly attended by TT businessmen as there was no known Guyanese businessman or representative from any of the local private sector organisations including the American Chamber of Commerce-Guyana, Georgetown Chamber of Commerce and Industry or the Private Sector Commission.

One of the participants, speaking during an interactive session, expressed concern about the low turnout by Guyana’s private sector. But Dr Driver brushed off such concerns and said he was aware that the Guyanese business community was being inundated by people coming to give advice and “it probably can get a bit tiring”. 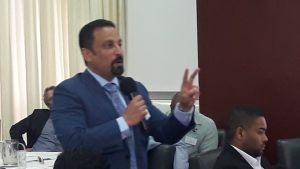 Dr Driver’s assurance came against the background of periodic concerns by the Georgetown Chamber of Commerce that Guyanese businesses are being disadvantaged by an increasing number of entities from TT that are seeking opportunities in the oil and gas sector.

ECTT Executive Member, Dwight Mahabir, said he was aware of concerns in Guyana about foreigners getting involved in the emerging oil and gas sector.

However, he told the Guyana Safety Forum that such critics must never discount the need for a high level of safety. “There is a real apprehension about Trinidad companies coming because they see it as, understandably, a risk to their business and so on, but there is a lot that’s involved in oil and gas that what you get away with otherwise, you are not going to get away with because it’s over a century of learning that has found itself in codes and practices and so on,” said Mahabir who has also registered a company in Guyana.

Dr Driver emphasised that the major oil companies would never tolerate shortcuts to safety standards because of the adverse impact that failures could cause to life and the environment. “For Guyanese companies meeting those safety requirements, that’s step one. You cannot get through the door to do business if you are not meeting those requirements. The international companies will not lower their requirements in order to do business with Guyanese companies nor should you ever asked them to or want them to because you want people to be safe,” he said. 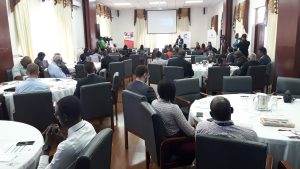 Participants at the “Guyana Safety Forum 2019” that was held at the Arthur Chung Conference Centre under the theme “Building a robust safety culture for private sector development”.

Pressing home the importance of safety, Dr Driver stressed that “You do not want to have people killed by the industry. You do not want to have spills, where you’re spilling hydrocarbons so, as a country, you should be pushing those international operators to have the highest possible standards and you should be pushing and challenging your local private sector to step up to meet those requirements,” he said.

He added that if companies want to be part of the oil and gas sector they must meet “high” international standards which TT has racked up for more than 100 years in working with BP, Shell, and Amoco. “Each Guyanese private sector company is going to have to decide if it wants to be part of this business. What’s the best route for it to take into it,” he said.

ECTT officials have pointed out that the CARICOM Single Market and Economy facilitates businesses and certain categories of persons from participating member states to enjoy the same rights such as free movement of capital and rights of establishment. “There is the freedom of capital to move around the Caribbean so companies are going to be here investing,” Dr Driver added.

He noted that some items and services that had been exported directly from Trinidad to Guyana’s offshore oil operations would eventually be provided by Trinidadian companies that would be setting up operations in Guyana.