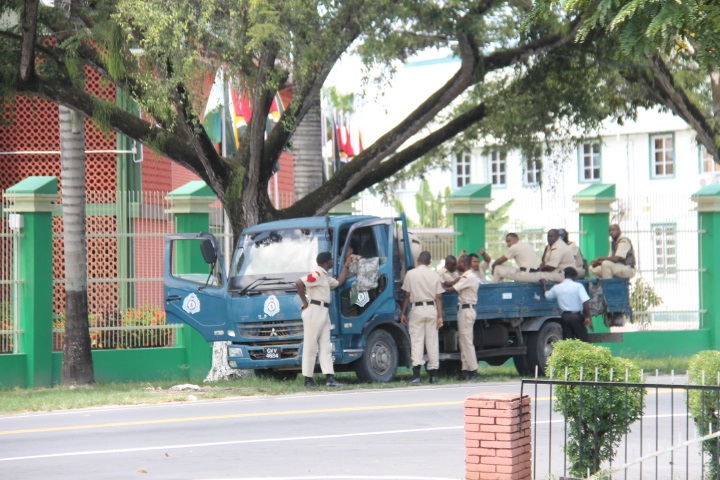 Riot police outside the Ministry of the Presidency, as Cabinet met on Tuesday

President David Granger is expected to address the nation on Wednesday.

This follow’s Tuesday’s Cabinet meeting at which the issue of holding of credible General and Regional elections in Guyana at the earliest possible time was high on the agenda.

Government’s Department of Public Information says the time of Granger’s address to the nation will be made known.

Meanwhile, police cordoned off several streets surrounding the Ministry of the Presidency.

A contingent of riot police parked outside the President’s Office as Granger and his ministers met inside, as a precautionary measure against any protest.

This caused heavy traffic congestion in several parts of Georgetown.

Guyanese 18 years and older from December 31 will be eligible to vote in next year’s general elections. That’s one of the key decisions coming out of the Guyana Elections Commission’s (GECOM) statutory meeting.

The seven-member body also agreed that Claims and Objections will begin on October 1 and last for 35 days. The Commission also agreed to accept assistance of advisors from the United States and the Commonwealth.

With the GECOM Chairman, Claudette Singh having already informed the President that the elections management agency will be ready to conduct polls any time after the end of February, elections commissioner Vincent Alexander says Tuesday’s decisions indicate that the country is well on the road to polling day. “We are working towards the timetable that was set by…that communicated decision of the Chairman for the Commission to be ready by the end of February,” he said.

These decisions came one day before President David Granger is due to address the nation. It is highly anticipated that he will inform the nation on his position concerning an elections date.

The international community, including the United States, United Kingdom, European Union and the Commonwealth, have said that Guyana has entered a period of unconstitutional rule.

They say that’s because September 18 has passed and general elections were not called in keeping with the decisions of the Caribbean Court of Justice.

However, the Alliance For Change wants the opposition People’s Progressive Party to grant an extension of the life of the government to avoid the legitimacy of the elections being challenged afterwards.