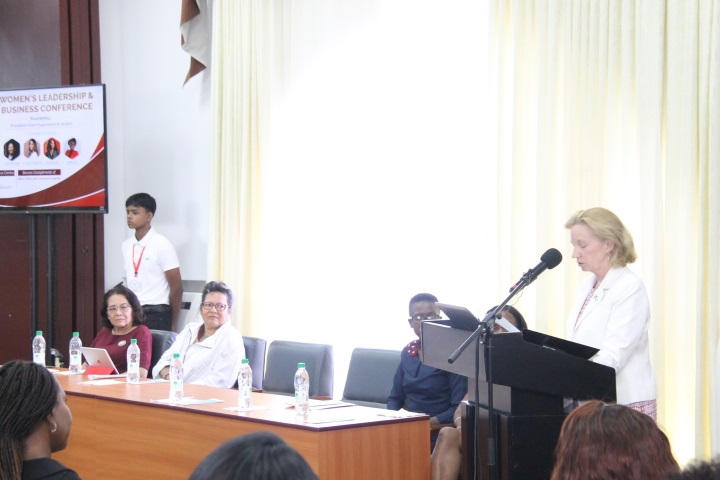 US Ambassador to Guyana, Sarah-Ann Lynch addressing the opening of the WeLead-organised women in entrepreneurship conference, PowHerful.

First Lady Sandra Granger on Wednesday lamented the scarcity of data on women in business, even as the United States (US) Ambassador to Guyana, Sarah-Ann Lynch said globally available data highlights the value of women in the development of countries.

Addressing the opening of the WeLead Conference on women’s entrepreneurship, an initiative of the non-governmental organisation, WeLead Caribbean, Mrs. Granger said most of the statistical information she got was more than 10 years old.

“I was trying to get information on women in business in Guyana and I called a friend of mine at one organisation and I got a response that the last time we had was in 1994 to 95. I called the Small Business Unit and I got some slightly more updated information but I couldn’t get the dis-aggregated – how many women got loans in relation to how many women? What was the quantum of the loan – males, females, what areas? It means that if you are thinking about developing and growing, you have to start from an information environment if we want to compete in the modern world and you have to know fast,” she said.

WeLead is founded by Guyanese Abbigale Loncke, a participant in the 2016 US State Department’s Young Leaders of the Americas Initiative.

Ambassador Lynch, in her address to the opening of the conference being held at the Arthur Chung Conference Centre, said women’s empowerment come from knowing who they are as “one half of humanity” and the varied contributions they continue to make. She says the figures are available to prove the successful roles that women have been playing. 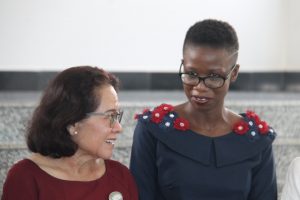 “There is so much data that supports the notion when you bring women into the political and economic life of a country, the GDP (Gross Domestic Product) goes up, and the poverty rates go down. It is proven that companies with more women in higher management positions achieve higher profits,” Lynch said.

The First Lady highlighted the successes of her series of self-reliance and success of business workshops that target “ordinary” women in developing and sustaining small businesses in a wide range of areas.

Those workshops, which included a small number of interested men, have been teaching participants how to manage and grow businesses either individually or as groups. Businesses include, event planning, jewellery design and manufacturing, food processing, fish processing in Region Three, a greenhouse farm in Sophia, a weeding gang in Buxton and a contracting group at Fort Wellington, West Coast Berbice. “They were able to access loans and grants from micro-finance organisation because they learnt in the workshops how to write and present a successful business plan. The range of skills is enormous,” she said. 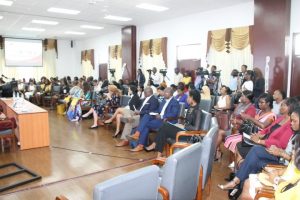 Participants at the WeLead-organised women in entrepreneurship conference whose theme was ‘PowerHerful: Transition from Inspiration to Action”.

Ambassador Lynch indicated that the time must come for an end to lip-service on the important role and contributions of women in business, government, diplomacy, civil society, health care, security and academia. “So, it’s not enough to just talk about empowering women, if you’re serious about the political, economic and security of the future. Women need to be involved in every aspect of shaping the world they live in, and they need the tools to do that,” she said.

The American envoy acknowledged that there are still historical barriers and obstacles to women achieving their full potential because many talented women worldwide still are discouraged that they cannot seem to get ahead. “Every day, sexism is still with us. We’ve all felt it. The meetings where your ideas are ignored, and a man says the same thing and he gets the credit. The banks that won’t extend credit to you because you’re a woman. The direct assaults on women who are attacked and then blamed for wearing the wrong thing or being in the wrong place at the wrong time”, Lynch said.

The theme of the WeLead conference is “PowHERful”: Transition from Inspiration to Action”.