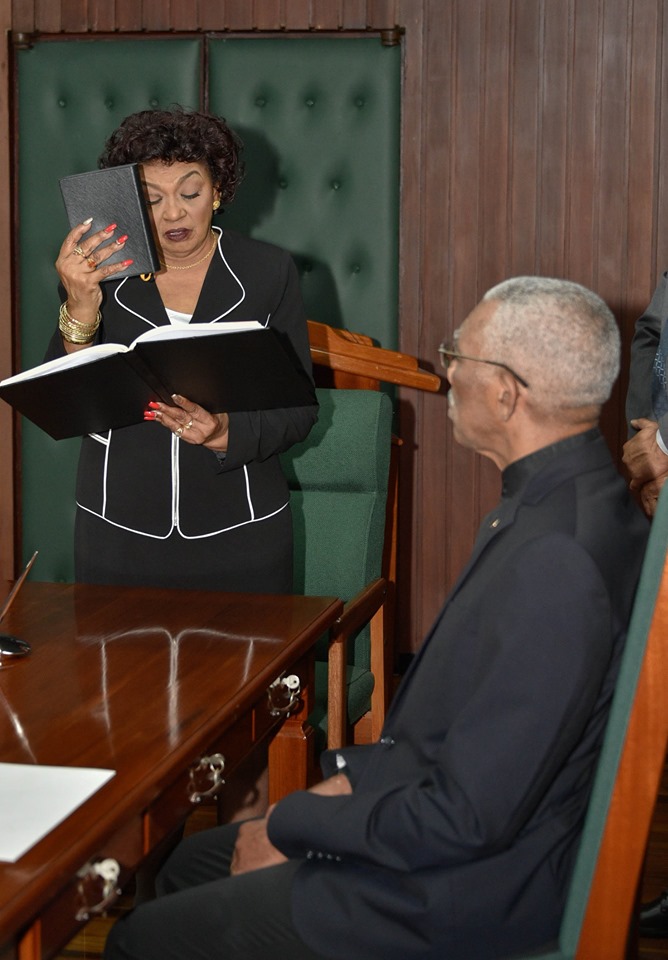 President David Granger administered the Oath of Office to Justice Claudette Singh, SC, CCH. She was sworn-in as the new Chairman of the Elections Commission.
In this photo, Justice Singh takes the Oath of Office at the Ministry of the Presidency.

Opposition People’s Progressive Party (PPP)-aligned election commissioners said the Chairman of the Guyana Elections Commission, Claudette Singh will on Thursday at 10:30 am “render a decision” on a timeframe for the conduct of general and regional council elections.

Sase Gunraj and Bibi Shadick declined to give any details. Shadick said the Chairman’s decision would essentially be “what she will tell the President”.

In an official statement to the media received at 6:40 pm, GECOM confirmed Alexander’s account to the media one hour earlier, and stated that “Chairperson of the Commission, Justice Claudette Singh undertook to study the submission, consult with the GECOM Secretariat, and based on all the information available to her make a decision on the way forward. Justice Singh will communicate this decision to the President in accordance with the mandate of the Commission tomorrow.”

President David Granger has said he would “act decisively” in dissolving Parliament and naming an election date.

“The end result is that the Chairman said she would make a decision, an announcement by tomorrow. That came after the commissioners nominated by the Leader of the Opposition failed to make a written proposal that was agreed to yesterday. On the other hand, Commissioner Corbin made a proposal. All they contended was elections should be held by November and they were not prepared to discuss anything else,” Alexander said. He added that Corbin made a submission that proposed that general elections be held in March, 2019, with possible negotiations to bring it down to an even earlier time,” he said.

Alexander said the PPP-aligned commissioners merely stuck to their position that GECOM can be ready for elections in November, 2019 but provided no details.