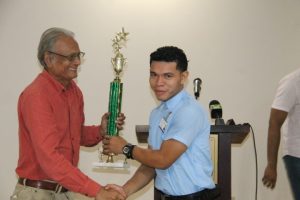 A young man, from whom the State dropped a murder charge because it struggled to prove its case, has become Youth Ambassador of the Year and he now has his eyes set on a university degree.

Ian Henry was 13 years at the time he was charged with murder and remanded to the Juvenile Holding Centre then eventually transferred on remand to the Georgetown and Timehri Prisons.

“We had a meeting with the Minister. We said the State was breaching all his constitutional rights because he was charged for a crime but they couldn’t prove it in the court and they held him for seven years on remand. The lawyer from Legal Aid got his case nolle prosequi (the prosecutor formally abandoned the case) and he was released from prison,” Panday told an RCC event to mark International Literacy Day that was observed on Sunday, September 8.

After receiving his trophy from former Minister of Public Service, Dr. Rupert Roopnaraine to honour him as Youth Ambassador of the Year, Henry said seminars, workshops, camps and countrywide visits through the RCC amounted to a rewarding experience.

Henry has since graduated as the Best Student from the Sophia Training Centre where he studied welding and fabrication and air conditioning and refrigeration repair. “I started to get new perspectives of the world. I started to realise there are more opportunities than being a normal person or being the person I was in the past so when the Youth Ambassadorship was presented to me by Mr. Amar and the RCC, I was kind of in a little doubt when it came but I accepted it,” Henry said.

He is now studying Metal Work Engineering at the Government Technical Institute as a first step towards pursuing studies at the University of Guyana.

Henry heaped praise upon the RCC Chief Executive Officer, even calling him his “father figure”.

Tagged with: Rights of the Child Commission (RCC) tertiary aspirations trophy Youth Ambassador of the Year