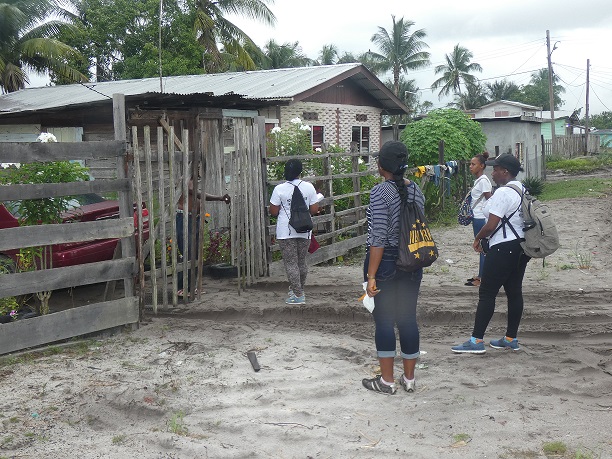 GECOM field officers being welcomed into a home by a resident of South Amelia’s Ward.

Hundreds of Lindeners have so far registered since the commencement of house-to-house registration on July 20, a Guyana Elections Commission (GECOM) spokeswoman said.

Among those who jotted down their names to be included in a new National Register of Registrants are potential first-time voters and regional officials, who are ensuring they set the example in getting registered promptly.

GECOM teams have been deployed to Mackenzie and Wismar shore to record residents for the voters’ list.

GECOM spokeswoman Yolanda Warde said 10 cluster offices were established; four on the Mackenzie shore and six on the Wismar shore; these are assisted by Assistant Registration Officers and field workers.

“Everything is going well, we have had some challenges dealing with the weather; however, the teams were able to manoeuvre their way around that,” Warde was quoted by government’s Department of Public Information as saying. In addition to Linden, teams have been dispatched to Kwakwani, Ituni and other outlying and riverain communities in Region 10.

Over the coming days, Warde said more teams would be dispatched to these communities to provide the needed complement to the already existing groups.

The opposition People’s Progressive Party (PPP) is not participating in the registration process and has instead challenged its constitutionality and legality including its claim that the process would result in a delay in the holding of general elections following last December’s no-confidence motion.

One regional official who has already been registered is Linden Town Councillor, Deron Adams who described the process as smooth and straightforward. Adams is encouraging all Lindeners, especially young people many of whom are expected to vote for the first time to get registered. Other officials who have started the process are Regional Chairman, Renis Morian and Mayor of Linden Waneka Arrindell.

On the afternoon of July 22, DPI caught up with two youths who had ensured they were registered in their communities. Reycia Nedd, from Mackenzie, said: “I’m happy that I got registered, and I am satisfied that I was a part of a process that will see free and credible elections whenever it is called. I urge all Guyanese to take part in the House-to-House Registration process to avoid being disenfranchised come Elections Day.”

Similar sentiments were shared by Andel Morville of South Amelia’s Ward Linden. “Getting registered is a must! I didn’t expect them to come to my house so quickly; everything went smoothly, I had all my documents, and I finished the process. I will make sure I vote in the next elections.”

Meanwhile, youth leaders of established groups in Linden are encouraging young people to play their part in getting registered.

Vernon Todd, the founder of For the Children’s Sake Foundation, a 17-year-old NGO, is encouraging youths to exercise their democratic right to get registered to vote and also play a role in organising their colleagues to do so.

“Between now and election day, young people can make calls, knock on doors, and mobilise their peers on college campuses and in digital spaces. I feel tremendous hope and optimism that young voters will help move our nation forward,” he said.

Founder of the Linden Youth Network, Deron Adams described the next elections as the “mother of all elections”. In his interaction with several young people, he urged the young voters to ensure they support the candidate whom they feel best represents their needs. “I appeal to my fellow youths, let’s not be complacent,” he urged.

During the last two months, many youths in Linden took to the streets to protest the need for house-to-house registration.

Since commnecing house-to-house registration on Saturday, GECOM has registered over 20,000 persons.