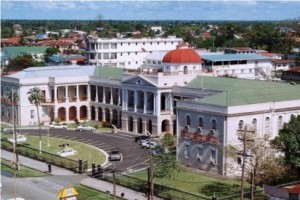 Director-General of the Ministry of the Presidency, Joseph Harmon said Friday that the Guyana government would abide by next week Tuesday’s judgments on whether last December’s no-confidence motion is valid and if President David Granger’s unilateral appointment of James Patterson as Chairman of the Guyana Elections Commission (GECOM) is unconstitutional.

“Whatever decision the court arrives at, it is a decision, which we as a government we have committed to accept it and, therefore, we have no trepidation or fear about the decision itself. We are prepared for whatever the court will decide. We will accept the finding of the court and we will act on that finding,” Harmon said.

Legal experts say if the CCJ finds that the motion was validly passed, the court may also issue consequential orders concerning the timeframe within which general elections should be held.

The Director-General said “we feel bound” by the CCJ’s decision, and “we will honour and obey the decision of the court”.

The Guyana Court of Appeal, which had ruled that the motion needed an absolute majority of 34 of the 65 parliamentary votes to be validly passed, has also pointed out that if that had been the case, elections would have had to be held within three months. The motion secured 33 votes after then government parliamentarian, Charrandass Persaud, had voted for the opposition-sponsored motion that the PPP had hoped would have triggered elections by March, 2019.

Opposition Leader, Bharrat Jagdeo, through his lawyer Douglas Mendes, has already indicated that he would ask the CCJ to consider allowing general elections to be held under the GECOM chairmanship of Patterson even if the court finds his appointment unconstitutional.

If Jagdeo does not get his way, analysts believe that the appointment of a new GECOM Chairman by the President can take several months.

Patterson and the three pro-government elections commissioners have already agreed to conduct house-to-house registration to extract a fresh voters’ list in time for elections to be possibly held in November, 2019.

The National Assembly has already approved GYD$134 million for GECOM to conduct the polls.

The High Court is yet to decide on the constitutionality of house-to-house registration on the grounds of a United Kingdom-based retiree claiming that she would be disenfranchised because her name would be taken off the existing voters’ list.

A legal opinion by GECOM’s Legal Adviser, Attorney-at-Law Excellence Dazzell that the voters’ list, which expired on April 30, need to be extended, has been rebuffed by the pro-government elections commissioners.

President Granger in 2017 rejected the Opposition Leader’s 18 nominees for the post of GECOM Chairman and after almost one year and the setting of a number of conditions, appointed Patterson to succeed Dr. Steve Surujbally who resigned after several years at the helm of the seven-member commission.